It's my greatest delight to present you one of my first and greatest cyber friends and ardent supporters of my writing, coming all the way from the United States, who has her roots in Romania. I prepared this post as a surprise for her. She's a shy, modest person, though multi-talented and a compassionate and generous soul. Let's give a a big hand to
Ionia Martin.
She shares with us her novel, a bodice-ripper parody : 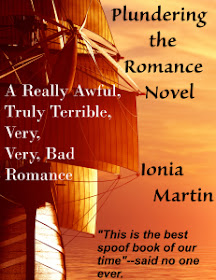 Description: A silly, satirical romp into the land of romance novels and pirate adventures, full of romance clichés and humor. This book is a short novella, just over 10k words.


Have you ever wondered what goes on in the minds and hearts of romance novel heroes and heroines? No? Good, because this book won't be helpful with that at all.


If romance clichés drive you mad and you like Monty Python style humour, this may be the perfect book for you.


From the twisted mind of a sometimes writer and lifelong reader, you are certain to have less brain cells than you started with after reading this book.


Captain Stormy is the typical romance hero/villain archetype. He follows the Romance Hero Handbook to the letter, but he is about to figure out that nothing in his guidebook is going to prepare him for the trials he's about to face.


Uncooperative heroines, lack of treasure, severely delayed sex scenes, a missing crew and an old man's butt cheeks later, Stormy has a story to tell you.


Even pirates have bad days.


*contains some mature themes and language
Buy link: Amazon
Excerpt:
“Should we not be doing something? Surely characters in a romance cannot just stand around on board a ship all day long making eyes at one another. Don’t you have a map of buried treasure or a key that opens a treasure chest or something to point us in some kind of direction?” asked Candy, looking around her at the storm brewing overhead. The storm was made possible by our sponsors, Pointless Pancakes. They were too broke to offer up a real storm, so the characters will now spend a minute or two yelling boom! While attempting to make rain noises.


“I have neither a map, nor a key, miss,” Captain V.D. announced, as he tossed the map and key he was holding into the ocean. “I am not one of those clichéd pirates that female authors put in their high-seas themed smut books.”


“That scene has ended. It’s time to move on to the part where you see my sensitive side and fall helplessly in love with me.”


Candy looked him up and down. She wondered why the 1500’s seemed to be such a popular theme in romance. Didn’t authors know that deodorant had not been invented yet and soap was more of a luxury than a prerequisite? She could smell him from 11 and ¼ feet away and she was pretty sure that if she moved even farther away, she would still be able to. She wrinkled her nose. That’s what characters do when something smells bad, apparently.


Stormy looked overhead at the clear blue sky and thought about how inconsistencies in romance novels can really kill a story. He ran a hand through his closely cropped red hair and jumped a little when a thunder blast struck overhead. He admired Candy from far enough away that he hoped she wouldn’t be able to smell him. His hopes were obviously in vain, as she was covering her nose with one of those pointless decorative fans that women of the era liked to carry.


This girl is an odd one, he thought. She wasn’t particularly difficult to talk to, as women were supposed to be. She didn’t try to run from him, of course, at this point in the story he was too tired to chase her anyway and she did not seem to be the slightest bit in need of rescuing. He was wondering how he was going to rescue her from danger even though he was the one who originally kidnapped her and put her in danger in the first place, when something happened that changed both of their fortunes. A seagull flew overhead and dropped a coin. One of them was about to be a coin richer.


They both scrambled across the deck after the coin (it is so annoying when an author keeps using the same word over and again.) Crashing into one another and falling to the deck, they watched as the coin rolled away down to a grate and nearly tipped inside. Captain Ahab, I mean, Captain V.D., flared into a pyre of burning temper. “Dammit woman! That coin could make all the difference right now! I’m going to go get it and you stay here! Stay put! I’m not kidding,” he reminded her, pointing his index finger in her face.


Suddenly Candy began to behave exactly as a romance heroine does, and burst out into a flood of enormous tears and began to sob and wail and sniffle and sniff and cry and moan and snuffle and weep and then the author ran out of synonyms. Naturally, this made Stormy feel terrible, so he took her chin and lifted it so he could look deeply into her eyes and convey his silent apology. “I’m Sorry,” he said, not silently at all, still keeping an eye on the coin perched precariously at the edge of the grate. Pirate.


Candy continued to carry on for a moment, before trying to pull away and hide her tear-stained face, because no romance heroine wants to admit that they do the ugly cry. Candy continued to wriggle and struggle against his firm grasp. (Why he would grasp her firmly on the chin is another matter entirely.)


“I didn’t mean to upset you. I will go get the coin and once I have the coin I will allow you to hold the coin until we get to wherever the author decides we are going and then I will use the coin to buy you something pretty, after I buy myself a drink, with the coin. If there’s enough left from the coin, I mean.


Candy dried her cheeks upon her skirts and stared up at him, eyes still glistening. “Stop saying ‘coin’” she said in a trembling voice. “It is annoying the fuck out of me.”


Captain felt his heart do a flip flop. She swore like a sailor. Sexy. 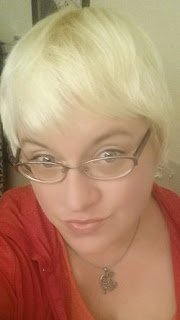 My name is a Ionia Martin. I am a writer, a reader, a musician, a photographer and a mother. I am also a book reviewer/blogger and love to read books of many genres/styles and varieties. I love discovering new voices in literature.


I am also a dedicated scholar of Colonial America with a focus on the period from mid to late seventeenth century.


I'm currently working on writing a series of comedy books that spoof the various genres of literature (as well as some historical events) and point out common pitfalls in genre fiction. When I'm not working on those, I'm devoting my time to reading, and the study of Colonial America. (Yes, I can be serious once in a while, but who wants to make a career out of that?)


I love to travel and explore new places to get ideas for my books. I also have a lot of fun on my blog, Readful Things. Hope to see you there!


I've got four little boys who keep me pretty busy and my ten year old son is already practicing his own book writing skills (uh-oh.) I love hearing your thoughts and opinions on my work, be they positive or negative.


Author links:
Blog
Twitter
If you want a laugh get this book which is silly cheap, $1.23, and check if there are any missing romance tropes.
Unknown at 12:00 AM
Share