Publication Date: July 31, 2012
It's been six months since Jesse Shantel got out of physical therapy. Ten years since she escaped the crumbling colony of Nevarreh. And it's been three years since she last saw Thomas Jameson. But how long will it take to put the broken pieces back together again?

Humanity has been at war against the merciless space-faring race known as the G'thaar for more than fifty years. In the struggle, Earth has developed heavy battleships known as battle cruisers and outfitted them with spacefighters, and the new breed of pilots that fly them.

Major Jesse 'Katana' Shantel is one of these pilots, and one of the best. She's been retired for three years, but has a second chance on the newly dispatched Perseverance. What she doesn't know is that the former love of her life, Lieutenant Colonel Thomas 'Dixie' Jameson - a love lost before it was ever truly had - is also on board.

There's one week before the Perseverance arrives at the border between humanity's colonies and the G'thaar, where the ship will be patrolling. Can the demons of the past be overcome before they encounter the demons of humanity's present?

How far should two people go to regain the chance of what was once lost?

Steel Wings, set in a futuristic world, is a compelling story for the lovers of this genre. I can truly say Sci-Fi is not my favorite genre of books and yet, after a friend recommended it, I read it and it was worth the time. This book is about cyber warfare and romance and adventure.
Well-written, with a strong female character, Jesse, and a fast paced plot it is an enjoyable read for older teens and adult. It has interesting characters that have good depth to them. I really like the way the plot and the characters were developed. Will Jesse succeed in regaining what she once lost, the love of her life?

Steel Wings is a light romance story that, once again, reminded me that love is powerful and if two people are meant to be together, then they will find each other  in the end.

The only fault I find in this story is the fact it's too short. It ends too soon. I gladly give it what it deserves: 5 stars.


Review Shadows of the Past - by Adriana Dascalu

The book is exactly what the blurb promises to be: a beautiful and touching paranormal love story that plays on the idea that love transcends time and soul mates will always search for each other.

First, I loved the premise of the book: the restless soul of a young nun from the XVth century leads Anne, its present day reincarnation, towards the place where the nun's body has been abandoned centuries ago without being aloud to find peace.

Secondly, I loved the shift between present and past, between Anne's and Genevive's stories and the way their stories are woven together. Carmen plays the visions/apparitions/dreams card and the fact that in spite of telling the story of two different female protags, she manages to create background for both Genevive and Anne.

Thirdly, I liked the descriptions the author used to put everything in place - I'm not usually a big fan of thorough descriptions, but this book is one of the few exceptions.

I'd say Carmen managed to write a beautiful, touching love story that transcends time, about overcoming adversity and one's learning, personal growth and transformation and a second love story about choices.

The end of the book is a happy one if just a little gloomy, which is understandable for such a tragic story (promising more, maybe? - I hope so).

I felt for Genevive's lack of luck, I loved Anne for her strenght and I loved the  book.

Posted by Unknown at 7:43 AM 8 comments:
Email ThisBlogThis!Share to TwitterShare to FacebookShare to Pinterest
Labels: Adriana Dascalu, Carmen Stefanescu, love, nun, reincarnation, restless, Shadows of the Past, soul, story, tragic 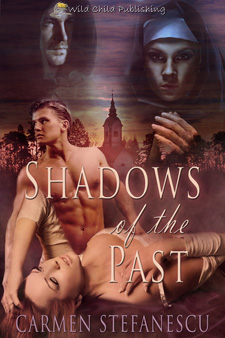 Shadows of the past

Shadows of the Past is an entertaining paranormal romance that also perfectly blends in elements of horror and mystery. Original and intricate, this story with its many thrilling plot twists keeps readers at the edge of their seats. Alternating viewpoints between Genevieve, a nun living during medieval times, and Anne, living in the 1990s, Carmen Stefanescu creatively tells Genevieve’s story from childhood to adulthood as well as Anne’s attempt to reconcile with her lover, Neil.  Genevieve’s life is a difficult one filled with fear and loss, but it’s her amazing ability to overcome these horrible events that makes her such a compelling character. While haunted by ghosts, Anne shows great strength in sharing her fears with Neil, which endeared her character to me.

But, the most stunning part of this story is intensely creepy cursed forest and its connection to Genevieve and Anne. Advancing the plot, well-developed secondary characters complement Anne and her need to know what happened to Genevieve in the cursed forest. The introduction of these characters makes the reader wonder how they are connected to the people in Genevieve’s life, which adds depth to this story.

Complete with hair-raising moments, two captivating stories, and a shocking cliffhanger ending, Shadows of the Past is a well-crafted novel that leaves the reader wanting more. 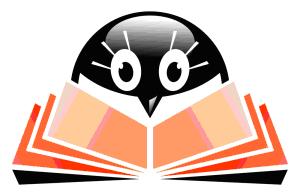 
Today I have the great pleasure to host the beautiful author Terri Talley Venters. 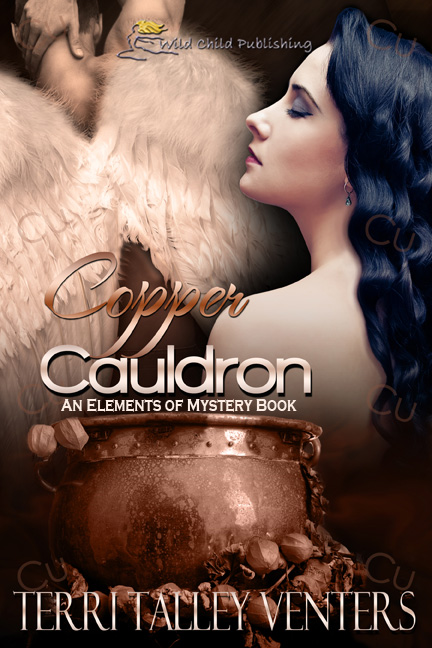 
Copper Cauldron Book Blurb
Penelope Manchester, a good witch with one green and one blue eye, awaits her destiny: a warrior of God with the face of an angel, the heart of a saint, and eyes which match her own. St. Michael the Archangel flies into her life and sweeps her off her feet. Meanwhile, an evil sorcerer captures witches, steals their powers and most of their nine lives, and shrinks them to the size of a doll--a Nürnberg, doll. But when he turns two of the Manchester witches into dolls, the Manchester clan fights back with St. Michael and divine intervention. Armed with the legendary copper cauldron, a fire breathing dragon, and an arsenal of spells, good battles evil.

“Ah, here it is.” Violet’s frail fingers touched the ancient book in the Manchester library. She tried to retrieve it from the bottom of the twelve-foot book shelf, but the weight stopped her.
“Here, let me help you.” Penelope pulled the enormous text out with ease.
Violet sat in one of the two wing-backed chairs in front of the fireplace, looking exhausted by her efforts.
Penelope carried the book to her great-grandmother. The scene reminded her of her childhood. She recalled hearing tales of her ancestors in front of the fireplace under the portrait of St. Michael the Archangel. She gazed up at the portrait of her family’s patron saint and smiled. He looked like the man she saw at St. Michael’s in Munich.
Violet opened the ancient book as the other four witches perched around the chair looking on. Dust flew as she delicately turned the thick parchment paper. The vibrant colors of the drawings leapt from the pages. Meticulous, handwritten words filled the pages opposite the pictures.
“How old is this book, Violet?” Cat asked.
“It’s over one thousand years old. But many of the legends were added as the centuries passed.” Violet still turned the pages towards the back of the book.
“Ah, here it is, the legend of the Nürnberg Dolls,” Violet read.
Penelope stared at the pictures in the book. It showed the dolls of shrunken, comatose witches whose powers and lives were stolen. She recognized the drawing of Nürnberg Castle, the Hexenhäusle, and the interior of Marcus’s coven.
Violet read the meticulously scribed text from the book.
Once upon a time, an evil sorcerer lived in Nürnberg. Marcus wanted to be the most powerful sorcerer in the world and live forever. He lured unsuspecting witches and wizards into his lair beneath Nürnberg Castle and then charmed them with his eyes and promised them rare potion ingredients for the price of a mere kiss. After he seduced them, he cast a spell to steal their powers. Once the witches lost their powers, he used the gilded-silver double cups to cast the antispell of the Copper Cauldron’s life-saving one. Instead of saving a witch’s life, the antispell transferred the witch’s remaining lives to the invoker of the spell. But just before the last life left the witch’s body, the evil sorcerer stopped the spell, leaving the witch with only a fraction of one life. With only a fraction of life remaining, the witch shrank to a fraction of her size--the size of a doll. The evil sorcerer, Marcus, collected the dolls as the centuries passed. His most prized dolls carried the one blue, one green eye trait. Author of Carbon Copy, Tin Roof, Body Of Gold, and Copper Cauldron, Terri received her Bachelor’s degree in Accounting and Master’s degree in Taxation from the University of Florida. She is a licensed CPA and a Second Degree Black Belt in Taekwondo. She lives in St. Augustine, Florida, with her husband, Garrison, and their two sons.