What if today was "lights out?"

In Lights Out by Kayelle Allen, the hero knows his end is near. Instead of running, Tornahdo makes a choice. He will face death with a clear conscience and the knowledge that his death will serve mankind. He will join...
GHOST CORPS
Buy link: Amazon

He can save mankind. After he does one important thing. Die.

When Tornahdo signs on the dotted line, he puts his life into the steady hands of the mighty Ghost Corps. Three grisly deaths and three agonizing resurrections later, he's assigned duty on Enderium Six.

He's facing his most dangerous mission yet, the very reason the corps exists.

Do they expect him to win? Fat chance. Tornahdo and his team are already dead and this mission is codenamed "Lights Out." No, there's more to this than he can see.

To discover the truth, he must face an unbeatable, unkillable enemy, and this time--somehow--find a way to keep himself alive...


Excerpt, Lights Out by Kayelle Allen

The air reeked of antiseptic and starch stiffened the pillowcase. If only the mind-numbing jabbering would stop.

Spanish curses slipped out. His abuela would've taken a switch to him. He made the sign of the cross and kissed his fingertips.

After yanking the tube out of his arm, he pressed a thumb over the entry point. Thankfully, this time, he wasn't writhing on the floor in agony. Well, not yet.

A faceless android in a Ghost Corps uniform loomed over a bank of equipment displaying Tornahdo's name and vitals. First impression was right. Military hospital.

"Did you hear?" a youthful voice bragged. "He killed six of 'em last night."

"Yeah, but they don't stay dead. They never do."

"If Ultras didn't come back to life, their plasma wouldn't bring our own people back."

The transfusion of enemy blood healed the hole in Tornahdo's arm in seconds. He thumbed off the red smear and rolled over on the gurney.

An open door led to a sink and toilet built to let gravity do its work. Which meant this was a planet. You hadn't lived until you were in space, floating in zero gravity while your body's final twitches sent your corpse spinning.

Notices on the wall confirmed this was San Xavier in the Colonies of Man. Same place he'd bought it the first time.

This was getting old.

Peek Inside Lights Out

Go behind the scenes with the world and characters of Lights Out with an exclusive illustrated PDF book. Nothing to sign for or opt in to get. Just click and read:
http://bit.ly/peek-lights-out

Kayelle Allen writes Sci Fi and Space Opera with misbehaving robots, mythic heroes, role playing immortal gamers, and warriors who purr. She's a US Navy veteran who's been married so long she's tenured. She is the author of seven books, three novellas, and multiple short stories.

Abby loved David all her life. Growing up she went everywhere he did. When he joined the Marines she did too. Then disaster struck. After leaving the Marines, she returns to the family ranch in Montana hoping to heal her shattered heart. On a ride into the foothills she sees something glowing in the side of the mountain. When she goes to investigate she discovers a fist-sized sapphire that turns her already fragile world upside down. Jake Barrow is a part-time gambler, full-time hired gun. His decisions are based on hunches and the turn of a card. He’s in the foothills when a young woman comes tumbling down the mountain. Unsure whether Lady Luck has dealt him a good hand or a bad, he takes one look at the beauty at his feet and doesn’t need to shuffle the deck to know she’s his destiny. 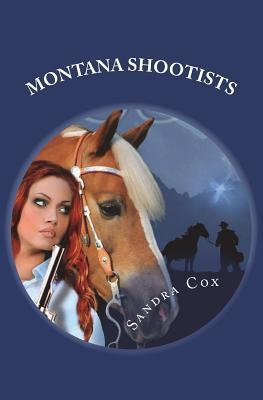 Sandra Cox creates the most charming couples in her stories. I’ve never been disappointed. In this story, both Abbigail Jennings and Jake Barrow grow not just in strength, but in love and wisdom as well. I loved them right off, but by the end I was mesmerized.
I like the way  they are portrayed. In fact, all characters have their own,unique story.  They all  have emotions, like in real life-not just black or white...we can see their strength , power , sadness, weakness ,their faith ,love ,pain , humor ,smiles , tears.


Montana Shootists  is heart warming and makes you fall in love with the characters and the imaginative story. It flows real well and kept me wanting to read more. It is nice to read a romance novel that had something behind it, other than living in the bedroom! Highly recommended reading  as a vacation get-away book.


Let yourself be immersed into Montana Shootists' world.