My blog hosts today a promo for the fellow author Robert Clark and his novel Blade of Iron. 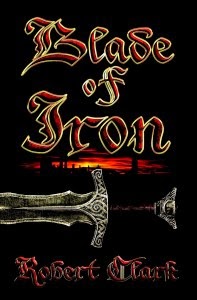 Blade of Iron
Blurb
Earth is invaded by creatures we thought existed only in myth and superstition.  Technology fails, making the seemingly primitive weapons of the invaders far more effective than modern weapons and tools that no longer work.  A small group of humans may have the weapon needed to defeat the leader of the invaders and ultimately save the earth.  To use the ancient, iron-bladed dagger they must fight their way to Washington against seemingly overwhelming odds.


Reaching Washington is no guarantee of success.  With the dagger comes a warning telling how it must be used.  It will only serve its purpose if wielded by the smallest member of the family possessing it.  Will they be forced to send a four year old against the leader of the invaders with nothing but a dagger to use against him?


The other mounted humans were occupied with the smaller humanoids as the last giant stepped in front of the wagon.  Tokoteth turned the wagon to avoid the big monster, but it was obvious that the giant would reach the vehicle.  Even a glancing blow from the creature’s huge club would knock the wagon over.


With a scream of rage Edward jumped from the wagon, sword in hand, placing himself between the wagon and the giant.  Seeming annoyed but not worried, the monster made a casual swat at the boy with his club.  Edward avoided the blow and charged in, his sword whistling through the air to remove the giant’s kneecap.


Off balance in the process of stepping toward the wagon, the giant went down on his face.  Edward ran to the front of the giant and brought his sword down with all his strength.  The giant’s head rolled ten feet before stopping against one of the wagon’s wheels.


Edward turned to the remaining monsters and attacked as if possessed by the spirit of every great human warrior in the history of the race.  Hobgoblins, reptile men and ogres fell before him with hardly a chance to defend themselves.


The other humans and their animals, sensing victory, pushed the attack from all points.  Seconds later there were no more enemies left to fight.  The last reptile man died under Temper’s hooves.  The only movements on the bloody ground were those of Magus and his friends as they looked for more enemies to destroy.


Forcing themselves to calm down, controlling the epinephrine induced killing rage surging through their bodies, the survivors of the battle walked to the wagon.  At least, all but one moved toward the wagon.  Edward stood limp, with barely enough muscle tension to hold his body upright, his sword dangling loose in his right hand, his eyes vacant and empty.


As his parents guided him to the wagon, Crystal sat up.  The laugh coming from her body before she spoke was no more hers than the harsh taunting voice coming from her mouth.


“Good.  Very good, my little toys.  You have learned well and quickly, preparing yourselves for my use and enjoyment.  I have found my wonderful little plaything again, as you can well observe.  Rest now, little puppets.  You will not be attacked again until we meet.  I have prepared you as best I can.  Taking your souls will greatly increase my power.  Enjoy your last night as sane, whole, living beings, for tomorrow you will meet horrors such as none of you can imagine.”