Please welcome my guest and cyber friend Daisy Banks and her paranormal romance,

Reading about Daisy, I discovered something we had in common other than our love of romance– 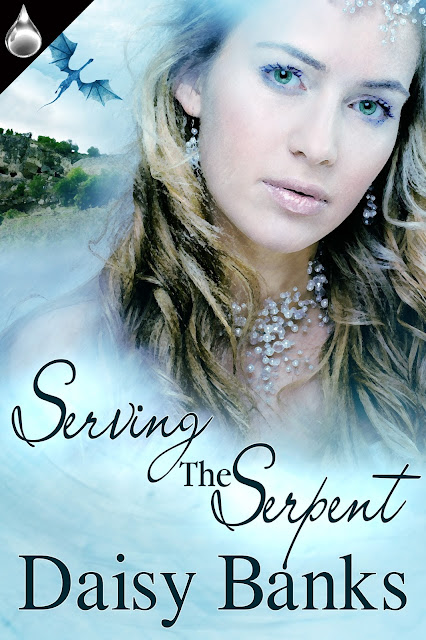 Blurb
In Wales, Ceridwyn takes up her inherited duty to care for the dragons in the mountains. Awed by them and the huge book about them, she is determined to prove her worth.
Far away in Norway, Leif has growing concerns for his sick dragon. He discovers only one cure will stop his dragon’s suffering. The mighty Herensuge must journey to find his bonded mate.
When they meet, Ceri and Leif make combined efforts to aid the dragons and discover an astonishing surprise. The great lore book each of them protects tells they have a responsibility to the future. At this rare and magical time, not only the dragon pairing must occur.
Join Ceri and Leif as they work to keep the sworn silence and keep the dragons safe. Friendship is growing between them, but will it be enough? Can love blossom between two chosen to serve the serpent?
Buy link: is not available yet
Excerpt

Ceri said a swift, silent prayer and ducked into the cave mouth. Here, she undid the belt at her hips so her robes hung smooth as they should, and she slid off her Wellington boots. From this entrance, she’d tread barefoot over the chilly surface of the compacted pale clay and raw quartz pebbles of the path. Along and down, she searched with her fingers over the cold and damp rock wall, feeling her way down. She descended deeper into the gloom and passed the low-hanging lump of granite Mam always called Lizzie’s Pap. The darkness now complete, her stomach rolling and her breathing rapid, she heard the echo of Mam’s instructions in her mind as she stepped for the first time onto the gravel-edged shore where the dark waters of the Jet Llyn joined her world to that of her new charges. She counted four paces forward. Blind for now, she stretched out her right arm and felt about in the darkness until she found the thick branch of wood holding the torch she needed to light.
Tiny pebbles stuck under her toes. The nip in the air sent a shiver over her as she set her willow wand down, and with her fingers a bit shaky, she struck the match to light the moss wound around the top of the pole wedged into the gravel. The torch flared. The dry stalks, which must be replaced each visit here, took easily and burned up bright. She breathed out in a rush of relief. So far, everything was as it should be. A fresh rash of trembles raised gooseflesh all down her arms and not because of the chill in the cavern.
Ceri picked up her wand and lifted the lit torch. She carried the light in front of her in her left hand until she reached the scrap of gritty beach with its short rock causeway that projected forward like a finger reaching out toward the middle of the deep water. Here, she held the torch shoulder high so the light glittered and reflected as in a mirror off the depths of the Jet Llyn. In her other hand, she held the quartz-crystal-tipped rod, and pointing it, she positioned the clear stone on her wand so it hovered over the still dark surface.
She swallowed, gave a little quiver, forced down her apprehension, and sucked in a breath.
Beneath the quartz point of her rod, illuminated by the bright torchlight, a single fat bubble rose. The water rippled. Stronger circular movements followed until small waves lapped at the shore inches from where she curled her toes so they gripped into the stones. An itch tickled in her palm, but she kept the rod steady.
Just as Mam said, they were coming for her.
The dragons were coming.