Christmas is already over and New Year is soon on our threshold. Homes and stores are beautifully decorated . To Romanians, in general , - Christmas and New Year’s traditions and customs are very important!

Diverse, colorful and rich in symbols and meanings, these customs bring to the present glimpses of pre-Christian rituals and underline the predominant agrarian lifestyle from the past.

While traditionally in Romania Christmas is a day spent together with the family, New Year’s Eve is celebrated with friends or just staying at home and watching TV.

Romanians see New Year as a time when they should be passing on their ancient traditions, cultures, customs, and heritage to the future generation. This defines the rigorous following of traditions. New Year’s Eve is attributed a great importance. It is reflected in the saying “Do not let the year find you… because this is how your next year will be !”

For example, if the New Year catches you with a dirty home this is how your home will be for the entire next year.

It brings bad luck to enter into the New Year without any money in your pocket;  it's good to have money (especially new bills) in each wallet so on New Year’s Eve everybody is stuffing their pockets with money to ensure a prosperous new year.

If you have debts when entering the new year, you'll have debts all that year.

Be as noisy as possible at midnight on New Year's Eve to ward off the evil spirits (bells, firecrackers, etc.).

It's advised to dress in red on New Year's Eve.

If you have the patience to watch the three youtube videos of some ancient customs here at New Year
In the morning of the New Year’s Eve when groups of children go from house to house performing “Plugusorul” (the little plow). Equipped with bells and  whips, the children  sing  a traditional song,  featuring some agrarian or historical myths. The main message being  health wishes for the hosts and rich crops for the year to come. In the evening of the same day, groups of adults, dressed in traditional clothes and playing musical instruments, perform “Plugul” (the big plow), even bringing a plow with horses or bulls in more traditional villages.

The most colorful New Year’s Eve traditions are the mask-dances, magical ceremonials of death and rebirth, with a variety of representations from the animal world like goats, horses or bears, and fictional characters like the devil.

A most spectacular mask-dance is the “dance of the bear”, an iconic animal for  Romania's forests. Symbolizing the death and rebirth of the New Year, the dance of the bear brings to the scene intricate costumes. The dance is usually accompanied by  drums music  that dictates the rhythm of the performance.

Another representative mask-dance is the “goat”  telling the story of powerful magical practices. These  have the power of resurrecting the animal after it was charmed, another symbol of the death and rebirth of nature. Usually, the goat mask is carved from wood, covered in fur, with a jaw that moves up and down and has horns from a real goat. The body of the goat is made out of a colorful carpet.
Wishing all my friends, fans, followers and fellow authors  endless joy and a peaceful, awesome 2017!
May it be better than 2016!
Happy Writing and Reading!
Posted by Unknown at 12:00 AM 10 comments:
Email ThisBlogThis!Share to TwitterShare to FacebookShare to Pinterest
Labels: capra, goat, Mysterious Romania, New Year Customs and Traditions, plugusorul, reading, the bear, the plow, wishes, writing


I think there can't be a more beautiful way of closing the 2016 year than a book spotlight/release. Mary Morgan, a Californian author has just released a paranormal/time travel fantasy. I bet the story between the virtual covers is as enthralling as the cover. So,  wrap up your copy today and journey back in time to celebrate the season in 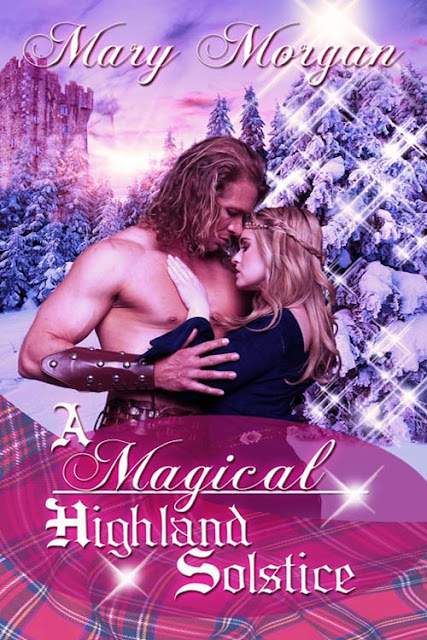 
Laird Cormac Murray has witnessed how love destroyed his own father after the death of his mother, and he vows to never take a wife. Yet, when he comes upon a bewildered lass traveling alone, he finds his heart will no longer listen to his mind. In the end, Cormac risks everything to claim the love of a woman not of his time.
Eve Brannigan loves helping others and baking. After winning a contest, she is stunned to learn that the Clan Murray has requested her assistance to cater to their guests during the holiday season. When a lost path in Scotland leads her to a handsome but gruff Highlander, Eve fights the temptation to allow love to enter her heart for the first time.
Can the Fae and the magic of the Yule season bring together two souls who have forsaken love? Or will tragedies from the past separate the lovers forever?


Excerpt:
Giving her no time to protest, he grabbed her around the waist and hauled her up onto Fingal. When he mounted his horse and settled behind her, Cormac felt her body stiffen as he placed an arm around her waist. He leaned next to her ear. Her mass of curls brushed his face, and he inhaled her scent—one of different spices. Lust instantly surged forth, powerful and intense. “Relax,” he urged in a hoarse voice. Though he found it difficult to do so himself.
He felt her tremble, but she nodded. Giving a tug on the reins, they moved up the path.
With each steady trot, her body swayed and Cormac tried to focus on the road. The castle.
Fighting in the lists. Bathing in the icy waters of the loch. Anything, but the soft curves of the lass’s body pressing against his own. What was wrong with him? He prided himself on being a man always in control of his emotions—especially his lustful ones. Yet, now he found himself confused, tongue-tied, and his gut twisted into knots.
So deep in his thoughts, he did not notice Fingal veering off the main road until the lass let out a giggle. She had the most musical sound, and he found himself smiling. Guiding his horse back to the path, he could hear his men doing their best to contain themselves. A glance back confirmed William was coughing loudly and Gordon trying his best not to fall off his horse.
“I swear Fingal, I am tempted to trade ye in for another horse. Ye must be going blind, or worse, old.”
His horse let out a large snort.
Eve clicked her tongue in disapproval. “For shame, Mr. Murray. How cruel. I think he’s a kind animal. Perhaps it’s the man holding the reins who can’t see clearly the path in front of him?”
The lass was quick with the wit, he mused. “I dinnae ken your word, but ye may call me Cormac.” He leaned near her again. “And I can assure ye, I am nae blind, nor old.”

Award-winning Scottish paranormal romance author, Mary Morgan, resides in Northern California, with her own knight in shining armor. However, during her travels to Scotland, England, and Ireland, she left a part of her soul in one of these countries and vows to return.


Mary's passion for books started at an early age along with an overactive imagination. She spent far too much time daydreaming and was told quite often to remove her head from the clouds. It wasn't until the closure of Borders Books where Mary worked that she found her true calling--writing romance. Now, the worlds she created in her mind are coming to life within her stories.


ORDER OF THE DRAGON KNIGHTS ~
They were an ancient order descended from the great Tuatha De Danann, a tribe from the Goddess Danu. Half human and half fae, each blessed with mystical powers. They were also given holy relics and guardianship over the dragons.

These are the Dragon Knights of Scotland!

With the dawn of Christianity, the dragons were systematically hunted down and slain leaving only one. The Dragon Knights took her from Ireland to a land across the sea, settling in the Great Glen near Urquhart. The clan was known as the MacKay clan, descendants from the MacAoidh.
Yet, there were those who deemed the Order had too much power, and they tried to possess it for themselves. They were evil and twisted, and their plan succeeded one fateful night.

The Clan Mackay is no longer.

The Dragon Knights scattered across the land.

Yet out of the darkness, they will each fight for redemption.