I think I told you several times that I suffer of Bibliomania.
Yes, yes the hobby that was considered in the 1800s as an illness in Europe.  I love to read and I also collect books of fiction. You can find books in Romanian, English and German on the shelves.

Here is a photo I took after I received a gift of BOOKS from a former student. She knew my passion and brought them to me from England, where she was a college student at that time. There are some dictionaries on the table and the photo of my older daughter can be seen on the shelf on a small wooden box. 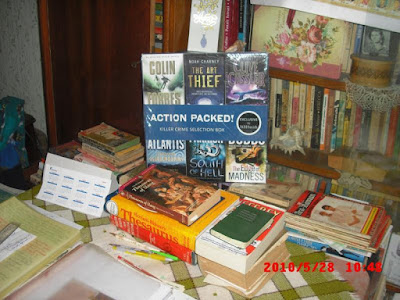 If you are curious to see what is on my other bookshelves, then, please visit here:
What's on your Bookshelf?
where I am a guest today.
See you there!
Posted by Unknown at 12:00 AM 12 comments:
Email ThisBlogThis!Share to TwitterShare to FacebookShare to Pinterest
Labels: author, Bibliomania, books, dictionary, guest promo, hobby, My# Bookshelf, novel

Guest promo Kryssie Fortune about #Desire, Deceit and the Doctor

I am sure you all will enjoy  the recipe of peanut brittle  my guest, Kryssie Fortune, brings today. As well as her new book release. 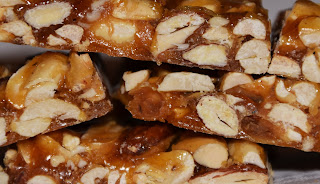 Peanuts? Straight from the shell or roasted, yes please. I’ll pass on the peanut butter though. North Carolina, the state where I set my imaginary town of Westhorpe Ridge, is the fifth biggest producer of peanuts in the United States.


Bill Friday, former host of North Carolina People and former president of the North Carolina university used to make peanut brittle. He “borrowed” his wife’s family recipe and mass produced it for their annual Thanksgiving Celebrations.


Fancy making some? I know I do. In fact, my mouth’s watering as I type.

So first collect your ingredients -
2 tablespoons butter, at room temperature


Stir together the sugar, corn syrup, and water in an unheated, deep, 12-inch, cast-iron skillet until completely smooth. Place on the stove and bring to a boil over high heat. Immediately stir in the peanuts. Cook, stirring continuously, until the syrup reaches 295° on a candy thermometer, about 7 minutes. The syrup should be the color of light caramel and the peanuts a deep golden brown.


Remove the skillet from the heat, sprinkle the baking soda evenly over the hot brittle, and stir rapidly with a long-handled spoon until the mixture stops foaming. Immediately pour the brittle onto the buttered marble and spread to a ½-inch thickness.


Let cool for 2 minutes. Run an offset spatula or metal pancake turner under the brittle to make sure it doesn’t


stick to the marble. Let cool to room temperature.


Break the brittle into large pieces. Store at room temperature in an airtight container.


My only problem is the marble slab. I have a marble chopping board, so I guess I need to go small scale to make this.
****
I bet Mandy Devlin, new owner of Devlin’s Hotel in Westhorpe Ridge, makes this to sell in the hotel’s lunch room. She’d try anything since the lunchroom’s the only thing keeping the hotel afloat.


Back when she was seven, Mandy had solemnly told her grandmother she’d own the hotel one day. That was before her younger self—the idiot cheerleader who got pregnant by the captain of the high school football team—had been forced out of town by her boyfriend’s great aunt. Thanks to her enforced ten-year absence from the town she loved, Mandy hadn’t set foot in Devlin’s Hotel for years. If she had, she’d have realized nothing had been updated since the 1970s.


Now she’s back in Westhorpe Ridge, a single mom with a ten-year-old son she adores. Refurbishing the hotel on a zero budget is hard, but life just got harder.


Adam Montgomery, the man who loved her and unknowingly left her pregnant-is on his way back to Westhopre Ridge. He’s served five years in the Army Medical Corps, but now he’s coming home to set up practice in Westhorpe Ridge. Worse, he needs a bride so he can inherit the fifteen million his great-aunt left him. Watching him pursue other women when he still holds a piece of her heart is the stuff of nightmares. Right up there with telling him he has a ten-year-old son he didn’t know existed.

Desire, Deceit and the Doctor 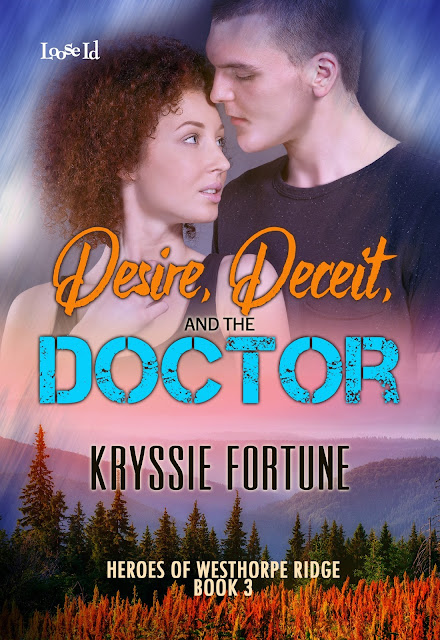 
After Adam Montgomery walked away and left her pregnant, dare Mandy trust him with her heart again?

Twelve years ago, Mandy Devlin moved away from her friends and family--under threat. If she returned in the next ten years or told anyone who fathered her baby, her boyfriend’s great-aunt would bankrupt her family. She’s a single mom who dreams of her lost love and a good spanking. When she’s finally free to return to Westhorpe Ridge, the last person she expects to see is Adam—the man she loved and lost so long ago.

Dr. Adam Montgomery doesn’t know he has a son. Thanks to his great-aunt’s will, he has nine months to find a bride or he loses Montgomery Hall and the fifteen million dollars she left him. Although he seduces Mandy on his first night home, he still believes she betrayed him twelve years ago. No way would he marry a woman like her.
As Valentine’s Day looms, someone tries to kill Mandy. Is Adam trying to get rid of her? Or can Mandy trust him to protect them?


Kryssie likes her contemporary heroes ex-military and dominant. Her heroines are kick ass females who can hold their own against whatever life - or Kryssie - throws at them.

Kryssie's pet hates any unhappy endings, and a series that ends on a cliff hanger.


Her books are all stand alone, even when they’re part of a series. Plot always comes before sex, but when her heroines and heroes get together, the sex is explosive and explicit.