Shardai is a large sleek cat with attitude. He has the courage of a tiger and the disdain of a king. The fearless feline has only one weakness: his guardian. He would do anything, even come back from the afterlife, for her. 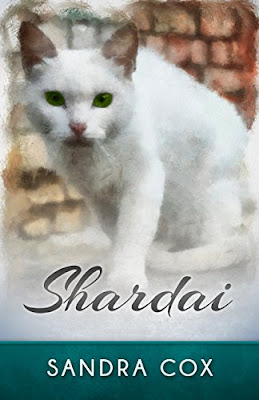 
I am a firm believer in rebirth so, if I admit it is possible for us, humans,  why shouldn’t it be also possible for the animal world?


As a pet owner – cats and a dog – I think I can characterize Shardai in two  words.  Delightful, touching. They describe Shardai to a tee. Other descriptions?  World building that doesn’t quit.  Wonderful  cat hero. The author has a way with words that makes the reader want to keep reading.  And so much more.


Even if Mrs. Cox’s book may be also  read as a story for kids , in my opinion,  it is much more than this. It is full of symbols and meanings. Shardai’s quest is full of dangers but he goes on looking for his human owner with whom he spent 12 years once and 7 years before that.


A rainbow bridge links Catarau ( cats’ heaven)  to human Heaven.  I think it symbolizes the mutual love we, humans, and our pets share. I was hooked from the beginning. No matter what most members of the cats’ council say and the warnings they give him about dangers  - snakes, foxes, dogs, hawks, bad water,  toms, lack of food, but above all “MAN”,  Shardai must get back to his beloved mistress in the cruel and callous human world.

The feelings pervading the whole story – love, understanding, compassion, devotion. The end of this heartwarming book left me with a smile on my face and a tear in my eyes.


Highly recommended to readers of all ages. 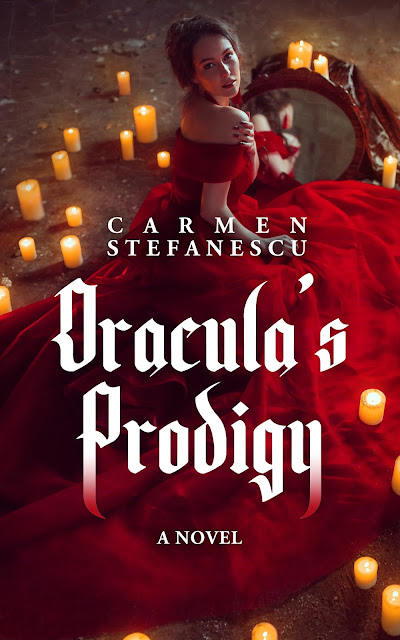 Invited abroad together with Dracula's Mistress

Hi everyone!
Here is a beautiful spring day. Even warmer than normal. I can't believe that, at the end of the previous week, we had high winds, snow and even frost.
I have great news. For me, at least. Dracula's Prodigy is released tomorrow. Isn't it great? I have no links for the moment, so...

But my post today is about my being a guest together with Dracula's Mistress, abroad. yes, virtually, of course. Sally Cronin, invited me at her amazing blog 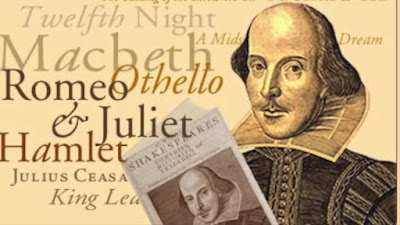 “The fool doth think he is wise, but the wise man knows himself to be a fool.”
“This above all: to thine own self be true, and it must follow, as the night the day, thou canst not then be false to any man.”
“Cowards die many times before their deaths; the valiant never taste of death but once.”
“In time we hate that which we often fear.”
“We are such stuff as dreams are made on, and our little life is rounded with a sleep.”
“The first thing we do, let's kill all the lawyers.”
“All the world's a stage, and all the men and women merely players.”
“I wasted time, and now doth time waste me.”
“Some are born great, some achieve greatness, and some have greatness thrust upon them.”
Posted by Unknown at 8:20 PM 2 comments:
Email ThisBlogThis!Share to TwitterShare to FacebookShare to Pinterest
Labels: anniversary, playwright, poet, Quotes, theater, William Shakespeare

Those of you who read my novel Till Life Do Us Part know that Barbara, the main character in this paranormal mystery,  can hear voices of the dead people. They tell her how they died and she is able to help the police solving some case.


Well, what I am sharing with you today is not fiction. It really happened in west Virginia, on January 23, 1897.

24 years old   Zona Heaster Shue is found dead in her own house.

She is buried, though witnesses do notice her head flopping around limply when she is moved. Cause of death? “Everlasting faint,” and  “complications from pregnancy,” according to the local doctor who also acts as coroner. The doctor tried to examine the victim, but the violent protestations of Shue, her husband of three months,  kept him from doing much more than glancing at her.

After praying every day for a month, Zona’s mother, has a dream. Zona’s  ghost confesses to her  that Shue cruelly abused her, and one night attacked her in a rage because she hadn’t made any meat for his dinner. He broke her neck, the ghost says, and it turns its head completely around to show her mother what happened. Then the ghost turns and walks away, disappearing into the night while staring back at her mother.

Armed with this information, Zona’s mother goes to the local prosecutor, Mr. Preston, and demands him to open an investigation. She is persistent and convincing enough  so  that he begins asking questions around town.
Shue’s neighbors and friends tell the prosecutor about the man’s strange behavior at the funeral. They say that Shue paced by the casket, fiddling with Zona’s head and neck. In addition to the collar and the veil, he covered her head and neck with a scarf. It didn’t match her burial dress, but Shue insisted that it was her favorite and that she would have wanted to be buried in it. He also propped her head up, first with a pillow and then a rolled up cloth.
Dr. Knapp  also admits,  at last, that his examination was incomplete.
An autopsy is done.
A local newspaper, The Pocahontas Times reports that, “On the throat were the marks of fingers indicating that she was strangled; that the neck was dislocated between the first and second vertebrae. The ligaments were torn and ruptured. The windpipe had been crushed at a point in front of the neck.”
It is clear the young woman’s death was not natural, but there is no evidence pointing to the killer, and no witnesses.
Shue’s strange behavior since his wife’s  death stuck in the prosecutor’s mind and cast some suspicion on him.
The prosecutor continues to investigate and begins looking into Shue’s past. He learns that Shue was married twice before. The first ended in divorce while Shue was in prison for stealing a horse. That wife later told police that Shue was extremely violent and beat her frequently while they were married. His second marriage ended after just eight months with the mysterious death of the wife. In between these marriages, Shue boasted in prison that he planned to marry seven women in his lifetime. The previous wife’s mysterious death and Shue’s history of abuse were circumstantial, but enough for Preston to bring him to trial.

Mary Jane, Zona's  mother is the prosecution’s star witness, with what the ghost revealed her.  Many people in the community, if not the jury, believe Heaster’s story, and Shue does himself no favors taking the stand in his own defense, rambling and appealing to the jury “to look into his face and then say if he was guilty.” The Greenbrier Independent reports that his “testimony, manner, and so forth, made an unfavorable impression on the spectators.” The jury deliberate for just an hour and ten minutes before returning a guilty verdict.

Shue is sentenced to life in prison, but dies soon after as epidemics of measles and pneumonia tore through the prison in the spring of 1900.
Mrs. Heaster lived until 1916, and never recanted her story about Elva’s ghost. Maybe Mrs. Heaster's story story swayed the jury and won the case. Maybe it didn’t. Maybe her daughter spoke to her from beyond the grave, maybe the ghost was all in Heaster’s head, or maybe it was a strategic lie. But no matter who saw or believed what, without the ghost story, Heaster may have never gone to Preston, and Shue might not have gone to trial.
What strikes as unusual is the fact that the state erected a monument in remembrance of the ghost who solved the death mystery! 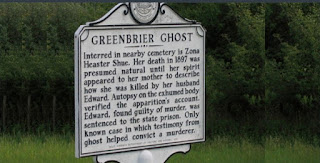