Logan Hunter is a bestselling author with a penchant for the ladies. Kendall Theron, his efficient publicist is prim and colorless—at least on the surface. Beneath the proper facade is a woman who will do anything to protect her family, even if it’s not quite legal.
Kendall, knowing her boss’s propensity for the fair sex, has replicated herself into a lady who should hold no appeal for the charismatic charmer she works for. She’s even added a Mrs. in front of her name for an extra layer of protection. If her boss ever turns those sharp eyes on her, if his curiosity is unleashed and he digs up her secrets, the results could mean jail time.
It’s taken Logan Hunter nearly three years to discover there’s more to his employee than meets the eye. An unplanned kiss that ignites them both has him looking at his publicist in a whole new light. He soon learns that the woman he thought he knew doesn’t exist, her persona an illusion. Everything she’s told him is a lie and he’s determined to find out why. 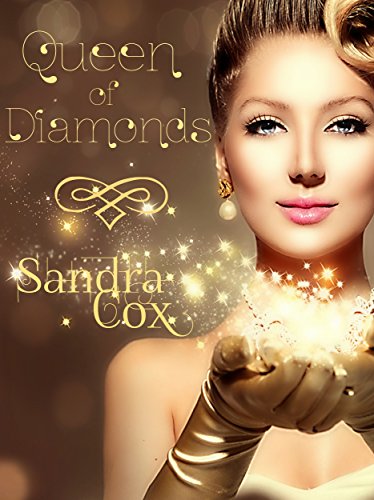 I chose to read this novel having already read several books of this author – Sandra Cox – and I  knew I would not be disappointed.
I highly recommend it to readers who want several hours of a feeling good story. Queen of Diamonds is a well- rounded, fun romantic comedy that will leave you with a smile on your face.
Kendall is not your usual heroine. Her obvious intelligence and perilous audacity make her an amazing character.
Will her boss, Logan  Hunter, a famous mystery writer, manage to untangle the web of deceit and lies under which she covers the dangerous truth?
Can Kendall master her feelings for Logan, a heart breaker?
Other two characters, Caroline and Kendall’s father, complete the cast of characters that steal your heart.