Chiajna Monastery, subject of many legends and urban myths, is a historical monument of the 18th century, at the outskirts of Bucharest, near a  huge garbage deposit. 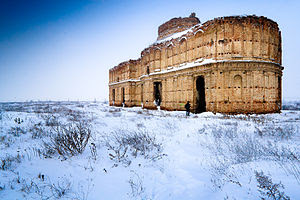 Its construction started during Alexandru Ipsilanti Voievod (1774- 1782) and was finished during the reign of Nicolae Mavrogheni (1786 – 1790). Built in neo classic style, with large dimensions for those times: 43 meters length and 17 meters height, it was intended as one of the most important religious establishments of the time, but it never happened. The legend claims the church is cursed. Priests have never had religious services in it because the church was bombarded by the Turks before it was consecrated. The Ottoman attackers thought the building to be a fortress and wanted to destroy it. All its documents were destroyed by fire, yet the building remained erect. Its steeple fell centuries later, during the 1977 strong earthquake that hit Romania and especially Bucharest, its capital town.
Some historians claim that the monastery was abandoned during the reign of Mihai Sutu because of a plague epidemics, after the death of Walachias Bishop Cosma Popescu, the leader of the Walachian church. The high priest died in this church because of plague.
Around 1948, during the communist times, the leaders of the country refused to approve the restoration of the church. Religion had no place in their regime.
There are architects who claim that the monastery could be restored, because a new one would be more expensive. The Romanian clergymen say a new construction would be more accessible. Unfortunately this is impossible to be done as the building is protected,  having the status of a national heritage site.
Along the years, encouraged by the loathsome disinterest of the authorities, gypsy people thought to put the monastery to better use instead of letting it rot in the winds. One by one, the bricks are snatched from the walls  and used in paving their yards or mending their houses.
The curse of the bell 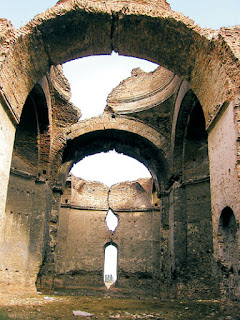 There are all kind of rumors linked to this building. People speak of odd shadows walking along the dilapidated walls. Several crimes and disappearances happened in the monastery, that is now just a ruin and they are linked to the curse of the bell. People living in the area speak of the huge bell of the church that was thrown into the  Dambovita river flowing nearby, several centuries ago. Some say the bell was taken down and hidden not to be taken by the Ottomans. And that during present day times it was unearthed and sold for iron. Others say it was thrown in the water so that the attackers couldn’t see the church. Recordings with bell tolls coming from under the water were made public, but they were never taken seriously.
A mysterious face etched into one of the walls, appeared from under the monastery’s  plaster. Some say it looks like a princes, others claim it looks like the  Romanian Sphinx.
Posted by Unknown at 12:00 AM
Email ThisBlogThis!Share to TwitterShare to FacebookShare to Pinterest
Labels: bell, Chiajna Monastery, cures, Mysterious Romania, national heritage site, Ottomans, steeple