One of the darkest times in human history was the insane design and execution to rid the world of Jews and “undesirables.” At the hands of the powerful evil madman Adolf Hitler, families were ripped apart and millions were slaughtered. Persecution, torture, devastation, and enduring the unthinkable remained for those who lived. This is the story of one woman who lived to tell her story. This is a narrative of how a young beautiful teenager, Helen Stein, and her family were torn asunder, ultimately bringing her to Auschwitz. It was there she suffered heinous indignity at the hands of the SS. It was also there, in that death camp, she encountered compassion, selfless acts of kindness, and friendship. Written by the award-winning, best-selling author of His Name Was Ben, comes a story of the resilience of the human spirit that will leave you thinking about Helen Stein and The Seven Year Dress for years to come after the last page is shut. 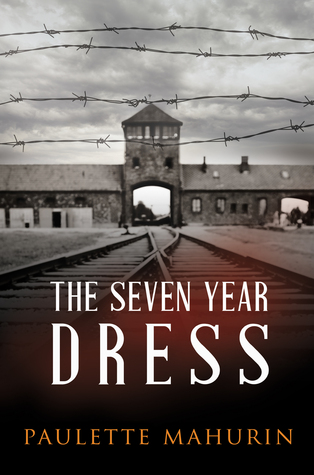 My review
I was eagerly awaiting Ms. Mahurin 's new book, and it more than met my expectations.
This is not an easy book, if only because the situation depicted is so dreadful, but Ms. Mahurin has a nice writing style and a sensitive point of view. She weaves, in The Seven Year Dress, a story of the weakness and the strength of the human spirit.
The Seven Year Dress delves a little deeper into the human condition than in the author’s  last novel, but still with the same themes of hope, despair, love, resilience and redemption.
The author focuses on Hitler’s Germany and the ruthless regime that swept across Europe in the 1930s and 1940s. While the descriptions are horribly realistic, the characters are not one dimensional.
The author's research was done very well. She has such a way of describing how the characters felt in so many situations. The story flows effortlessly with Helen Stein’s voice. Helen, a beautiful Jewish teenager trapped in a situation she has been forced to endure. It was a sick time in history, and I think books like this are important, because history does repeat itself. The more people who are horrified by the hatred, racism, and resulting unbelievable cruelty and disregard for human life, the more people there will be who will try to break the cycle of history.
The Seven Year Dress is not by any means a treatise on the Holocaust. It is one person’s observation, interpretation, and experience. It isn’t the Holocaust that comes alive in this book.  Helen, the survivor, comes alive.
I cringed inside reading about all that Helen had to suffer, though I previously read books and watched movies on the same topic.
A  touching moment is the one when Helen, after staying hidden for a long time, receives a dress from Max. „This dress was a symbol of normalcy, my femininity, and my past,” Helen says.  I cried reading those pages, which is one of the signs of a good book.
The background characters, Ben, Max, Helen’s parents, Ester were equally important.
Author Paulette Mahurin, via Helen’s story, pulls no punches in descriptions of the horror and human tragedy that befell not only the European Jews but also millions of other people whose “crime” was that they were non-Aryan, elderly, sick, political prisoners, or disabled, and therefore, unfit to live.
All in all, The Seven Year Dress is gripping, heartbreaking, but beautiful.