Oddities of all kinds (1)


Well, dear followers. I don’t know about you,  but I must confess I recognized myself as sufering form the illness I describe in today’s post. But let’s not waste the time and proceed with the post:Bibliomania

Have you ever heard about an illness called Bibliomania? Neither have I. Yet, this dark desire for books infected Europe in the 1800s. Book lovers and collectors feared becoming a victim of the pseudo-illness.


The social elite and scholars did everything they could to obtain and collect books—no matter the price. Some collectors spent their entire fortunes to build their personal libraries. While it was never medically classified, people in the 1800s truly feared bibliomania. There are several written accounts, fictional and real, of bibliomania, but the most famous and bizarre documentation is by Reverend Thomas Frognell Dibdin, an English book lover and victim of the neurosis. In 1809 he published Bibliomania -  or Book Madness- a series of strange, rambling fictional dialogues based on conversations and real collectors Dibdin had encountered. 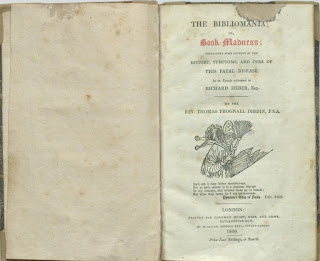 The first edition of Bibliomania; or Book Madness published in 1809 is regarded as one of the most famous descriptions of bibliomania and book collecting in the 1800s. The Thomas Fisher Rare Book Library, University of Toronto
David Fernández , speaking about this book states,  “I think a very good word to describe the book is that it’s very bizarre.” He says it after studying his library’s preserved copy of the 1809 first edition. “It’s a product of the generation in which it appears.” On the title page of the book, an engraving depicts a “book fool,” a character originally featured in the 1498 book, Ship of Fools, the first work of fiction to reference the discovery of the new world. That character is described as a vain book collector, the story touching on madness among scholars and collectors, explains Fernández.


According to Reverend Dibdin, the author of this strange book, the “book-plague” had reached its height in Paris and London in 1789. After the French Revolution in 1799, French aristocrats sold their estates to flee from the country and many private libraries emptied their shelves. 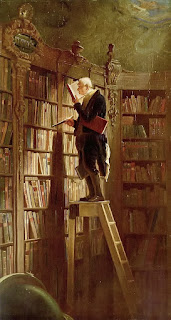 A bibliophile caring for his extensive collection, painted by Carl Spitzweg in 1850. Public Domain

Men and some women collectors purchased books to conserve and preserve Europe’s literary heritage, while others did so as a symbol of wealth and power. At this time, constructing books was a delicate and laborious art completed by hand—from cutting the paper to creating the binding—which added value.
Dibdin points out eight particular types of books that collectors obsessed over: first editions, true editions, black letter printed books, large paper copies; uncut books with edges that are not sheared by binder’s tools; illustrated copies; unique copies with morocco binding or silk lining; and copies printed on vellum.

Some contemporary scholars have linked bibliomania with obsessive compulsive disorder. “The pleasure that hoarders take in collecting can be so profound that it might define a person’s self-image and even give the individual a life purpose.”


Reverend Dibbin’s Bibliomania was widely popular among Dibdin’s fellow book lovers, with collectors getting in reckless bidding wars at auctions over a copy. The book is said to have spurred a 42-day auction at the 1817 Roxburghe sale.