Please, welcome today fellow author and member of Marketing for Romance Writers group Valerie Ullmer. She shares with us one of her latest released books:
Unexpected
(A Unexpected Novel Book One) 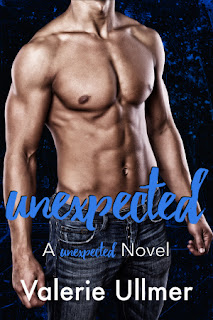 A chance meeting will change their lives forever…

From the moment he entered the dark taproom, Caleb Hunt found himself drawn to the handsome man who sat alone at the end of the bar, away from the crowd. His interest in the dark-haired, muscled adonis took him by surprise, not remembering when he’d felt such hunger from a simple glimpse. Unable to stay away, he quickly found an open seat next to him and slid into it. When Ronan turned his ice-blue eyes to Caleb and introduced himself, his warm hand sent shivers of desire through his body and he was enthralled.

Ronan Scott’s boring Friday night had taken a turn for the better when Caleb took the seat next to him. Over the next few hours, he found Caleb easy to talk to and at the same time, he found that he couldn’t tear his gaze away from the beautiful man. Caleb captured his attention in a way that no other had for as long as he could remember. Taking a chance, he leaned forward and captured Caleb’s lips with his. And with the simple kiss, Ronan understood that Caleb would become an essential part of his life.

As Ronan and Caleb explore their new relationship and integrate their lives together, they realize that not everything will be so seamless…

That’s when he spotted him and everything stopped.
His breathing hitched in his chest and his heart thudded once, hard, and even the music seemed to fade as his gaze landed on a dark-haired man who sat by himself at the bar.  As Caleb’s eyes slid down the man’s body of their own accord, he noted the fitted black tee that emphasized the muscles of his arms, back, and shoulders, before his gaze dropped lower to his legs encased in denim.
When he lifted a beer to his mouth and swallowed, Caleb felt his own throat tighten.  A shiver of desire passed over him.  Never had he felt this way about a man or woman in his life.
Before he could analyze his actions or talk himself out of his stupid plan, he walked toward the man.  Part of him wanted to see if the man was as stunning as he believed from across the bar or if he’d been alone for so long that his mind had conjured the perfect man.
Before Caleb could reach the stool next to him, a beautiful blonde glided up to him, running her hand down his chest.  Her smile flirty and sensual.  Although Caleb had never been propositioned in any way close to resembling what he witnessed, he knew that she offered the man a brazen invitation to get to know her better.
Disappointment flooded Caleb’s chest.
In the next moment, however, she frowned and backed away from him as quickly as she arrived, leaving an empty chair.
Not questioning his good luck, Caleb hurried over and shed his coat, dropping it over the back.  He flagged down the bartender and indicated the beer he wanted.
He sensed the man’s eyes on him, but for the moment, he wasn’t brave enough to turn and catch his gaze.  Not when his breath had stuck in his throat, and he didn’t know if he could speak without sounding choked.
As soon as the bartender handed him his mug, the man turned his body toward him and leaned over to speak, close to his ear.
“Are you here alone?”
Caleb had to bite the inside of his lip in order not to moan out loud at the sexy, deep voice.  Remembering the question, he shook his head and pointed toward Dylan and Garrett across the room.  Dylan, of course, had a woman on his lap and was tracing a finger down her neck, before he leaned toward her and his mouth followed the same trail.
Garrett was looking down at his phone.  The shy woman he’d been talking to had disappeared, much to Caleb’s disappointment, and another was trying, unsuccessfully, to get his attention.  She looked drunk and very loud by the way he flinched every time she spoke.
“Dylan, the one on the right with a woman on his lap, is the biggest flirt in the world.  He’s never serious about any woman he takes home.  Garrett is his best friend, the complete opposite of Dylan, but he’s loyal.”
The man laughed and Caleb couldn’t help the lift of his lips at the sound.  It was deep, rich, and addictive.  But when the man turned his ice-blue eyes on him, something unidentifiable swelled in his chest.  He could sense that he should speak, to keep this gorgeous man talking for as long as possible.  “Are you here alone?”
Smart, Caleb.  Just parrot the same question back.
The man smiled before he nodded over to his group of friends.  Some were flirting, but others were enjoying the company of their friends on a Friday night.
“The ginger is Hawk; he’s a divorce lawyer who is handling Ryan’s divorce.  That’s why they’re hunched over their beers.  Ryan’s wife apparently hadn’t been faithful during their entire four-year marriage, and he found out when he came home early from a business trip.  Jack is the one who is flirting with the group of women; he’s like Dylan in that way, never serious.  He’s a CEO of a tech company and he could have any woman with his looks and the power he exudes, but he’s never been in a serious relationship.  Sam is my second-in-command, the one who looks faintly sick, because Adam is a forensic scientist who loves talking about his work.”
Caleb found himself smiling at the group of friends.  When he glanced at the man, who had turned back to Caleb after pointing out his friends, he snagged Caleb’s gaze.  “So, do you have a girlfriend at home?”
“No.  I can’t remember the last time I had a date, much less a successful one.  You?”
Caleb breathed a sigh of relief when he shook his head.
“I’m Ronan Scott.”  He held his hand out.
Shit, even the man’s name is sexy.
He had to clear his throat before he reached out and grasped Ronan’s large, warm hand in his.  “Caleb Hunt.”
Something inside Caleb warmed in increments until fireworks exploded behind his skin, all from a simple touch.

ABOUT AUTHOR
Valerie writes paranormal and contemporary romances with strong alpha males and brilliant beautiful heroines, She lives in Denver, Colorado, with her wonderfully supportive husband and their funny and wise black lab. She's addicted to coffee, crime shows, and reading and writing character driven romances.