Let's give a warm welcome to Ashley York, talented author and great organizer of Medieval Monday Author Exchange Tour. She shares with us her captivating book:
The  Gentle Knight. 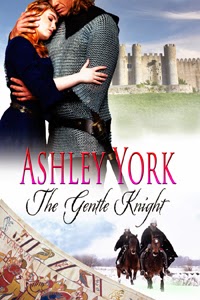 BLURB:
A medieval soldier returns home to find his lover died in childbirth just as his own mother had. Believing he is cursed, Peter of Normandy turns from love. When he must give escort to an Irish princess more noble than many knights, he struggles with his decision to live a solitary life. Can he take the chance that his love won't be a death sentence and possibly make them stronger?


Padraig MacNaughton's death bed decree rips his daughter, Brighit, from the shelter of her protective clan in Ireland. Forced to take vows at a Priory in England, she finds herself in the hands of lecherous mercenaries with their own agendas. Dare she trust the Norman knight to see her safely to her new life as a nun? Even when she finds in him the fulfillment of all she's ever wanted?

Or will honor and duty eclipse their one chance for happiness?
Buy links
Apple         Kobo         Amazon          Barnes and Noble
Website: www.ashleyyorkauthor.com


The barrenness of the countryside would take Brighit some time to get used to. Perhaps it was only this area, but it seemed nothing like her home which was so lush and green. She missed her family. A tightness began to build in her throat but Brighit refused to acknowledge it. A splashing sound came to her from just beyond the tree stand.


She glanced back the way she'd come. The need to return immediately or confront Ivan's wrath had her clenching her teeth. That splash sounded very much like the lake Lachlann had mentioned. A chance to clean her face and hands in a refreshing body of water rather than with a soaked cloth? The heat in that confined carriage was making her wilt. She sniffed and confirmed her stench was overwhelming. Before even thinking it through, she headed in the direction of the sound.


Brighit paused on the barely discernible path. Sure she heard rustling, she glanced behind at the open field she'd come from. It was empty. Nothing behind her that could make such a sound. Was it a deer perhaps? Taking a few steps farther, the small rise gave way to the breathtaking sight of a small lake. The top glistened like glass without a ripple to disturb its surface.


The slight breeze carried the pungent aroma of honeysuckle and lavender. The plants would be a wonderful thing to find and put in with her few belongings. Each night she would be surrounded by the smell of flowers. Without another thought she headed through the bushes to her right, careful to not make a sound in case the deer were still nearby. Movement along the banks drew her attention and she froze.


A man stood there dripping wet and naked. He pushed his hair away from his face. A handsome face with a strong jaw and a thick brow. She followed the movement of his hands, sloshing the water off his chiseled body. Blond hair spanned his broad chest and across his rippled torso, leading down his muscular legs, glistening in the fading light. His tarse was visible even from this distance. She looked long and hard. Her breathing became labored. Magnificent.


He turned in her direction. She ducked. She held her breath and shivered in the bush, willing her heart to stop pounding so loudly. When she ventured another peek, he was gone. Disappointment welled up inside her gut. She'd wanted nothing more than to sit and watch him, imagine how it would feel to run her hands down his expansive chest and firm body as he had done, to appreciate the rippled strength there. She blew out the breath she'd been holding and licked her dry lips. That certainly wasn't going to happen, not in this lifetime—as a nun. A small bush of purple flowers brushed her hand and she snatched it. Lavender. The sun was dropping below the hills in the west and she needed to get back. Enough of these wasted desires.


Brighit was no son and evil seemed a little too close. Ivan had told her he would not hesitate to make up a lie about who she was. Even saying she was his wife. Others would believe him because he was a man. Perhaps a little more protection from the same God who made her a female was not asking too much.