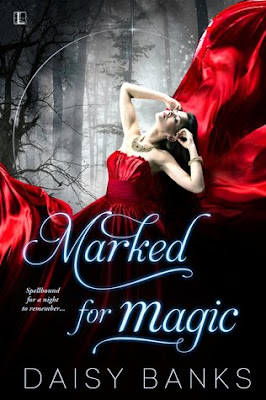 The witch mark on Nin’s hand is a curse. She has no magic powers, whatever the lore says. But the village believes. The old crone’s wisdom is to see her banished. Ragged and hungry, she must serve the Mage. Alone in his tower, she is his chattel. But Mage Thabit is not what Nin expected—the bright green eyes and supple form under his cloak are not the stuff of nightmares, and kindness hides in his brusque heart. Thabit senses that Nin is more than she seems, too. When true nightmares haunt the land, it is precisely her elusive powers that might deliver them…
Buy  link: Amazon

My Review
Ms. Banks has kept my interest from the first page to the last. Secrets, surprises, and prophecies. This is how I would sum up Marked for Magic. A fantasy romance that has captured my undivided attention with the entertaining love story between Ninian aka Nin and Mage Thabit. The plot is provocative, the characters are appealing,


“A grubby wench” is what the Mage calls Nin the first time he finds her on his doorstep. Thrown out of her village as she is considered a witch, Nin ‘s last hope for survival is  the Mage. “Only the Mage, this tower’s owner, stood between her and death in the forest.”
A frightening, arrogant man, with “eyes that gleamed like January lake water” is what  Nin considers the Mage to be when he allows her to enter his home.
But things will change little by little. With each passing day he realizes she is more than just a common peasant girl or a “foolish brat”. Her special powers may at some point even surpass his. This comes useful when evil forces will ensnare the realm.
Magic, romance, adventure are the story’s elements that kept me engrossed in the pages. And love at first sight, a feeling I believe in, makes it more relatable with Nin.  I am a great fan of stories with characters who prove their strength and indomitability,  and Nin and Thabit are such characters.  Marked for Magic is Nin’s quest of self discovery as a woman and as a  sorceress.
Lady Cassandra, Alicia  are also interesting characters who complete the story in a pleasant way.
The story is told in two POVs – Nin’s and Thabit’s. Both characters evolve along the story, they help each other grow and their forces unite and lead to the salvation of the realm from the darkness that enveloped it. I liked how the author built suspense.
I felt engaged and drawn into the mythical world of the story from the very first page. A story whose end will bring a smile to your face. Curl up with your copy of the Medieval suspense, Marked for Magic, today.  I highly recommend it if you want a well-written, pleasant story that will cheer you after a hard day. I was offered a complimentary copy of the book, by the author, with no obligations whatsoever. My Rating: