My #Romantic Idea for this summer
I love the beach and for me there’s nothing nicer than walk along the beach with my feet in the water, listening to the sound of the waves crushing along the shore, and my loved one by my side – hoping to spot a dolphin. 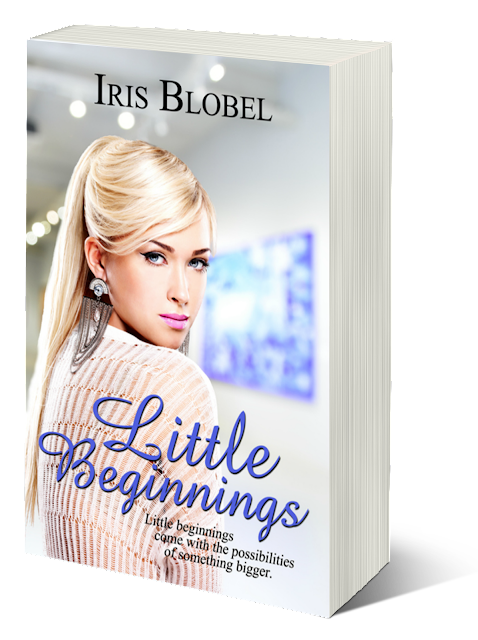 A blind date that doesn't happen might lead to love.


After her divorce, Jeri Belmont moved to Hobart and now runs a successful art gallery. When her niece sets her up with a neighbour, Jeri expects a blind date like the many she’s had. But she never expected her date wouldn’t even show up because of her age. Despite feeling unjustly judged, when she unexpectedly runs into him again, she finds it hard to ignore Ely’s charm.

Ely Lennox knows he shouldn’t have skipped the blind date because of the lady’s age. After all, it had only been a date, not a lifetime commitment. When his carpentry business takes him right to the woman he bailed out on, his guilt turns into regret when he finds out she’s everything a man could hope for. How can he convince Jeri that he knows acting so immaturely was a big mistake? Will she ever forgive him? Or is she hiding behind something else?

Iris Blobel was born and raised in Germany and only immigrated to Australia in the late 1990s. Having had the travel bug most of her life, Iris spent quite some time living in Scotland, London as well as Canada where she her husband. Her love for putting her stories onto paper has only emerged recently, but now her laptop is a constant companion.

Iris resides west of Melbourne with her husband and her two beautiful daughters.

Next to her job at a private school, she also presents a German Program at the local Community Radio.

Jeri Belmont checked the time on her watch. It was twenty past six, and they’d
agreed to meet at six.
He was late!
Steaming inside, and less than impressed by her blind date, she took another sip ofthe Chardonnay as she gazed around the restaurant. Everyone was engulfed in theirconversations, but occasionally one of the patrons glanced at her. She shrugged it off,confident in sitting on her own in the town’s most elegant restaurant.What she couldn’t shrug off, though, was her date being late.
She drank the last little bit of her wine, paid, and left. A deep disappointmentsettled in the pit of her stomach, surprising her, because it hadn’t been the first time she’d been on a blind date that ended with the guy not showing up.
She suppressed a groan as she thought of the man she’d met only a few weeks earlier. Admittedly, he’d been nice, but not at all what he’d pretended to be in the details she received from the “Your Future Heart” agency.
Yet, this rejection hurt inside. Olivia had told her so much about her neighbour, and she’d trusted her niece when she’d assured he’d be there.
Olivia was Georgia’s daughter. Georgia was Jeri’s cousin, but to avoid confusionthey all agreed on Olivia being her niece. Jeri loved Olivia like her own daughter and had often babysat her when she’d been younger. They’d been to movies, concerts, and Jeri had even been along to one of her niece’s trips to Melbourne to visit Olivia’s best friend Mia, who had moved across the Bass Strait.
As Jeri walked down the streets to her car, she replayed her conversation with her niece in her mind.
“How are your blind dates going?” her niece had asked as she came into Jeri’s gallery a couple of days ago.
She’d shrugged. “I have a winner’s luck getting hooked up with all the duds in town.” Jeri remembered hesitating, contemplating whether to speak the words in her head. Was she destined to live alone after her divorce? She wasn’t looking for the man of her dreams, just companionship. Someone to go out with once in a while.
Someone to share her day’s highlights or nightmares with.
“You should meet the guy from next door,” Olivia said. “He’s like sex on legs.
Honestly.”
Jeri let out a stifled laugh. “Listen, sweetie. I’m in my late thirties, good looking for that age, but sex on legs?”
“You just wait and see,” Olivia said as she looked at her watch. “Anyway, I’dbetter go. I’ll give you a call tonight. Prepare yourself for a nice night out with myneighbour!”
That had basically been it — she’d been set up on a blind date without actually agreeing to it. In hindsight, she knew she should’ve called it off, but deep inside, she’d hoped for a nice evening. She’d been most certain that none of Olivia’s friends were what she was looking for, but then again, she didn’t even know herself what she was looking for.
Posted by Unknown at 12:00 AM
Email ThisBlogThis!Share to TwitterShare to FacebookShare to Pinterest
Labels: #RomanticIdea, Iris Blobel, Little Beginnings