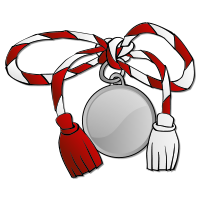 Mărțișor ( [mərtsiʃor]) is an old Romanian celebration at the beginning of spring, on March the 1st, which according to old calendar was also considered as the beginning of the new year. Symbolically, it is correlated to women and to fertility as a means of life and continuity. Alike though not identical customs can be found in Bulgaria, while similar ones exist in Albania, Greece and Italy.


The name Mărțișor is the diminutive of marț, the old folk name for March (Martie, in modern Romanian), and thus literally means "little March". It is also the folk name for this month. Some ethnologists believe that the Mărțișor celebration has Roman origins, others support the theory that it is an old Dacian tradition. 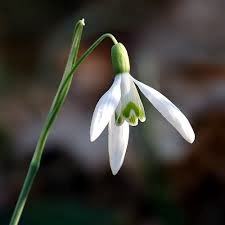 Mărțișor, marț and mărțiguș are all names for the red and white string from which a small decoration is tied, and which is offered by people on the 1st day of March. Giving this talisman to people is an old custom, and it is believed that the one who wears the red and white string will be strong and healthy for the year to come. It is also a symbol of the coming spring. Usually, both women and men wear it pinned to their clothes, close to the heart, until the last day of March, when they tie it to the branches of a fruit-tree. In modern times, and especially in urban areas, the Mărțișor lost most of its talisman properties and became more of a symbol of friendship or love, appreciation and respect. The black threads were replaced with red, but the delicate wool ropes are still a ‘cottage industry’ among people in the countryside, who comb out the wool, dye the floss, and twist it into thousands of tassels. In some areas the amulets are still made with black and white ropes, for warding off evil.


Nowadays, on March 1, Romanians buy silky red-white threads tied into a bow to which a small trinket is attached and offer them to the (female) family members, friends and colleagues to show friendship, respect or admiration.
Posted by Unknown at 11:15 PM
Email ThisBlogThis!Share to TwitterShare to FacebookShare to Pinterest
Labels: celebration, custom, friends, friendship, March, martisor, red, string, talisman, traditions, white, women