Today, before presenting the review for the latest book I've just read, I'd like first, to invite you all and join me in wishing the author
Happy Anniversary, Mae! And now let's speak about this novel:
WEATHERING ROCK
by Mae Clair 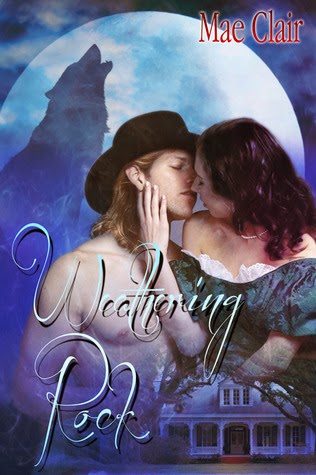 Drawn together across centuries, will their love be strong enough to defeat an ancient curse?

Colonel Caleb DeCardian was fighting America’s Civil War on the side of the Union when a freak shower of ball lightning transported him to the present, along with rival and former friend, Seth Reilly. Adapting to the 21st century is hard enough for the colonel, but he also has to find Seth, who cursed him to life as a werewolf. The last thing on Caleb’s mind is romance. Then fetching Arianna Hart nearly runs him down with her car. He can’t deny his attraction to the outspoken schoolteacher, but knows he should forget her.

Arianna finds Caleb bewildering, yet intriguing: courtly manners, smoldering sensuality and eyes that glow silver at night? When she sees Civil War photographs featuring a Union officer who looks exactly like Caleb, she begins to understand the man she is falling in love with harbors multiple secrets--some of which threaten the possibility of their happiness.

Finding a decent guy who'll commit is hard enough. How can she expect Caleb to forsake his own century to be with her.

Weathering Rock is the story of Arianna Hart, a teacher of American history at the local middle school who, driving home late in the evening, almost runs over a horse rider.  She meets Caleb DeCardian. ”He looked to be in his early thirties, dressed in jeans, a dark t-shirt and an archaic-looking frock coat. The garment was straight out of a history book.”  Caleb introduces himself as “Retired military.” And the adventure begins. An adventure filled with secrets, curses, time travel and a lot of twists and turns.


The author, Mae Clair, weaves so intricately romance, time travel, werewolf, history in the plot. I may say it’s a cross over. A bit for all tastes. I loved Weathering Rock because it took the  werewolf/human girl story line in a completely original direction. The characters were three-dimensional, believable, the dialogue flowed naturally, and no one fell in the clearly defined box of black or white, good or evil; the flow of the story takes you away.

I LOVED the Hero! Caleb is a fabulous hero. He's honorable and compassionate and protective, very alpha in some respects but in other respects rather vulnerable. He was everything you could want in a male lead: heroic, strong, sensitive, understanding, gorgeous, brave, vulnerable, passionate, sexy, and just down right lovable. There’s only one fault – he’s one hundred forty-five years older than the heroine.

I enjoyed the Caleb/Rick relationship especially. Touching and filled with unexpected revelations.


Chemistry between Arianna and Caleb is spot-on. You can feel the sexual tension and the friendship/love coming off the page.


Mae Clair has a vivid imagination and is a world-class storyteller. Her fondness for history is obvious. The characters are well thought out and the way the author describes them makes it easy to picture what they look like throughout the book. I'm looking forward to her next book.


It kept me up worrying and wondering what the characters would do next, and I thought about it long after I read the last page. It had me in knots at times, and smiling like an idiot at other times..


Here’s a quotation from Chapter Two, I thoroughly enjoyed: “. . . there were no King Arthurs left in the world, just Arthurs who expected to be treated like kings.”


If you love a good romance story with mystery and excitement around every corner, you will want to read this book for sure.
My rating: 5 stars