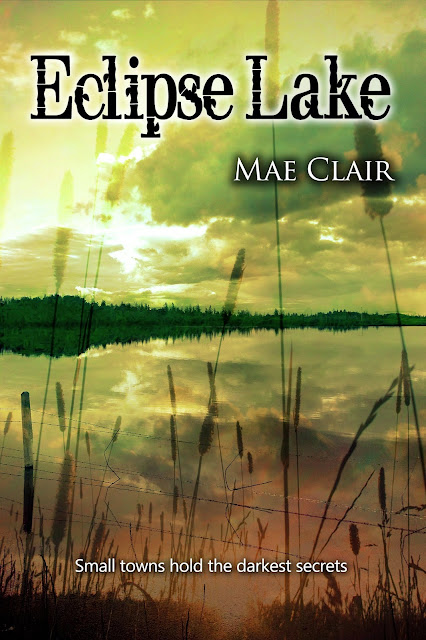 Blurb
Fifteen years after leaving his criminal past and estranged brother behind, widower Dane Carlisle returns to his hometown on the banks of sleepy Eclipse Lake. Now, a successful businessman, he has kept his troubled past a secret from most everyone, including his seventeen-year-old son.

But memories in small towns are bitter and long.
Ellie Sullivan, a nature photographer for a national magazine, has a habit of ping-ponging across the map. Her latest assignment leads her to Eclipse Lake where she becomes caught up in the enmity between Dane, his brother Jonah, and a vengeful town sheriff. When freshly-discovered skeletal remains are linked to an unsolved murder and Dane’s past, Ellie is left questioning her growing attraction for a man who harbors long-buried secrets.
Buy links: Amazon Kindle   Amazon Print
My Review
Romance, suspense, mystery! Mae Clair has truly outdone herself! The Eclipse Lake is stunning, powerful and emotional! I loved Dane and Ellie; their story  warmed my heart !


Onyx, a quiet, peaceful community at first glance, „where residents passed leisurely evenings in high-backed rockers and porch swings. Where farmers herd milk cows in from grazing at the end of a slow dusty day.”  But you know the saying -- Appearances are deceptive, don’t you? Terrible secrets, guilt and sins, scandal and old grudge  simmer under the appearence of a tranquil small town. As the author states in Chapter Two - Small, rural towns sometimes held the darkest secrets of all.  Indeed, Ridge Pointe especially is a place that keeps many  dangerous secrets.The reading of the book kept me turning the pages as the twists and turns popped up frequently, making me ooh and aah all the time.


The great thing about the book is that  I could relate to the characters, they are believable. The leading one is Dane Carlisle.


Dane, the deadbeat who left the town fifteen years before, has to face the ghosts of his troubled past. Will he persuade his brother Jonah that he’s now a changed man? Will he clean his name of all the accusations, the  most serious being  that of murder?  How will he be able to explain to his teenage son, Jesse, honor roll student and a regional archery champion,  that his  now  a wealthy and respected father  spent a year in Wells City Juvie, followed by six months in an adult prison as a teenager himself?


I especially enjoyed the description of family ties, the dynamic of their relationship : Dane – Jonah, Dane- Jesse.  Speaking of family dynamic there’s an interesting parallel between the Cralisles and the Sullivans. The former, Dane’s family, a dysfunctional one with an alcoholic mother, the latter, Ellie’s family, a loving one whre they support each others  and share laughter and fun.


I cringe when I read spoilers of the story, so I won’t reveal any more of this captivating book. Mae Clair does an excellent job of building emotion and intrigue; the outcome – a riveting story where even the setting is a character in itself. My Rating: