Oddities- Out of Place Artifacts.

Have you ever stopped for only one moment and considered  that the world isn’t quite what we think it is?
Why do I say it? Well, I am fascinated by odd occurrences,  by the so called paranormal- ghosts, haunted places,strange apparitions -  Loch Ness, or the Mothman or even the  controversial UFOs.  They are fascinating. Unlike many of these, that many say are just the figment of imagination of people, there are also tangible, enigmatic artifacts all over the world that in form and construction look pretty modern, though they don’t  fit the geologic or historical timeline. They are ancient, anachronistic artifacts. Hence the name –"ancient anomalies”, or Ooparts. They can be touched, examined but nothing in our present-day knowledge can explain their existence. Can they offer a different view of our world? Could there be more to the history of life on our planet than we currently know about? Welcome to the world of Ooparts, or Out of Place Artifacts.
Here are just a few examples:

Helicopter Hieroglyphs.   The 3,000-year-old hieroglyphs found in Seti I's temple in Abydos, Egypt, depict nothing less than a helicopter, plane and futuristic aircraft among the usual insects, symbols and snakes. One popular myth is that the "advanced race" who bought details of futuristic technology to the Egyptians, were visitors from a far-flung highly advanced planet, to share their knowledge with the primitive communities on Earth.
The ancient aliens conspiracy theory claims the extraterrestrials were the ones behind the development of the pyramids, Stonehenge and other world famous monuments. 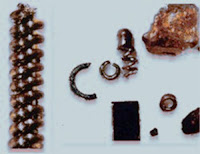 Ancient nanotechnology. In 1991-1993, gold prospectors on the Narada river on the eastern side of the Ural mountains in Russia found unusual, mostly spiral-shaped objects, the smallest measuring about 1/10,000th of an inch! The objects are composed of copper and the rare metals tungsten and molybdenum. Tests showed the objects to be between 20,000 and 318,000 years old.
Aiud Aluminum Artifact.  Romania has its share of Oooparts, too. In 1974 , workers digging a trench along the Mures River discovered a couple of mastodon bones and an enigmatic object, over which scientists have puzzled ever since.
This 5-pound, 8-inch long object of solid, nearly pure aluminum, clearly 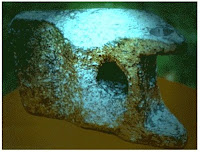 manufactured and not a natural formation was sent for analysis and was found to be composed of 89 percent aluminum with traces of copper, zinc, lead, cadmium, nickel, and other elements. Aluminum in this form is not found free in nature, but must be manufactured and wasn't produced in quantity until the 1800s.

If it is the same age as the mastodon bones, that would make it at lease 11,000 years old, when the last of that species went extinct. An analysis of the oxidized layer coating the artifact dated it to 300 to 400 years old -- still well before the known time when aluminum manufacturing process was invented.
So who made this object? And what was it used for? There are those who are quick, of course, to suggest it is of extraterrestrial origin... but the facts are at present unknown.
Oddly (or maybe not), the mysterious object has been secreted away somewhere and is not available for public viewing or further analysis.

There are dozens of examples of such Ooparts- enough to give the traditional scientific disciplines a shake-up, I would think.