Let's welcome today a special friend and fellow author Jessica Nicholls, who shares with us, in an interview, a few things about her and her writing! 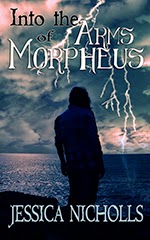 Question 1 -  Tell us a little about yourself.
My name is Jessica Nicholls, I’m a writer and mother.


Question 2-  When and where do you find time to write?  Special place?  Certain hours?
I mainly write during the school year, when the kids are in school.   When my kids started going to school full time, I began to treat writing like ‘my job’.  Now that I am in a rhythm, I am able to work in the mornings when the kids are playing at weekend, and during the holidays.   Occasionally I write in the evenings, when I’m desperate to finish something, but even then I struggle.  My brain functions best in the morning.

Question 3 - If you didn’t write, what other profession would you have selected?
Most likely a teacher, I do love kids and I have an appreciation for education.  I know a lot of teachers write as well, but that is such a tough job, I’m not sure I could do both as well as being a mother :).  Hats off to those who manage it ;).

Question 4 -.  What or who inspired you to write your first book?
To be honest, the genre of parnanormal romance and the concept of obsessive love plus a certain phrase I heard ‘I’m going to fall into the arms of morpheus’ combined themselves in my head.  Not that I wanted to write another paranormal romance itself, but I’m fascinated by the the effect it can have on people (I include myself in this).  I kind of thought, what if there was someone supernatural/otherworldly who you had a connection with, how would you carry that with you?  What would happen to someone in love with their fantasy? I imagined it getting to the point of being a religion.  That’s how Sylvia treats her devotion to Morpheus.

Question 5 - What is the name of your most recent book and if you had to sum it up in 30 or less words what would you say?
A dark fantasy novel set in Manchester, England,  involving a university student . Sylvia brings her adolescent obsession' with her to her adult life.

Question 6 -.  What age do you recommend your book for?
I struggled to pin this down.  There are a lot of adult themes (desire, love, lust, etc.) BUT there are no explicit, detailed love scenes though there is a lot of sensuality and fantasising.  To be on the really conservative side I would say 18+…but I don’t think it would be damaging for a 16 year old girl to read it.  It in no way promotes promiscuity and I’d like to think that young women would be able to relate to it and even take something positive away from it.  There’s a bit of Sylvia and Nyx in all of us ;)

Question 7 -  Do you have plans for a new book?  Is this part of a series?
I do have plans for a new book - I’m rewriting a manuscript that I’ve been working on on and off for a while, rather different to Into the Arms of Morpheus.   I do have plans for a sequel to Morpheus involving how characters progress but, I haven’t written anything yet.  It’s still brewing.
I love it when books are turned into movies, most of the time.  It’s a shame when its done poorly, obviously.  It’s also a shame when it appears to be being done purely to make money and not for any artistic or even enjoyment purposes.  A good example would be The Lord of the Rings trilogy, those are such beautiful films and they totally pulled me back into reading at a time when I wasn’t doing.   That happens a lot - films luring folks into reading who wouldn’t normally pick up a book. In the hands of the right film maker, if a story can come to life visually it’s a wonderful thing uniting audiences, readers, storytellers and film makers.

Question 8 -  If you were a villain from Disney, which one would it be and why?
If I was a Disney villain, I would be Snow White’s wicked queen/step mother.  I hate to admit it.  I like to encourage my kinder, softer side.  The one who cares more about love than about beauty…but I’m a woman.  We all want to be considered beautiful.  Sadly, a woman’s physical beauty is such an overvalued commodity in today’s world.  I’m torn because I admire beautiful women too and I want to be one….but I hate how much emphasis is on it.  I want my own daughter to enjoy being such a lovely girl, but I want her to appreciate that there is more to life and women should be valued for other reasons.  I fight my inner wicked queen on a daily basis for her sake.

Question 9 -  For or against books turned into movies?
I love it when books are turned into movies, most of the time.  It’s a shame when its done poorly, obviously.  It’s also a shame when it appears to be being done purely to make money and not for any artistic or even enjoyment purposes.  An example of great books turned into great movies would be The Lord of the Rings trilogy.  The films totally pulled me back into reading at a time when I wasn’t doing.   That happens a lot - films luring folks into reading who wouldn’t normally pick up a book. In the hands of the right film maker, if a story can come to life visually it’s a wonderful thing uniting audiences and story tellers of all kinds.

Question 10 - Why should we buy your book?
You should buy my book because it will pull you into a fantasy full of sensuality, dark obsessive urges and you will have a new appreciation for lesser known greek gods.  It will be like meeting a very exciting new friend.  Do it, you’ll like it.

Jessica Nicholls is originally from Northern Illinois.  She lived in the Northwest of England for just over ten years, where she studied and had her children.  Currently, Jessica lives in the Middle East with her husband and two now school age (yay!) kids.  Running, reading and watching films are her favorite hobbies. Writing the type of stories she would enjoy reading (anything dark and weird or romantic, or a combination of those) is a passion.
Posted by Unknown at 12:03 AM
Email ThisBlogThis!Share to TwitterShare to FacebookShare to Pinterest
Labels: interview, Into the arms of Morpheus, Jessica Nicholls, promo, teasers