When the chips are down, there's nobody there. Willowy blond Daisy Matthews has survived the Chicago streets with this mantra but is unprepared for the much older Nick Underwood's urgent pursuit. The wealthy businessman receives a thoroughbred in payment for a bad debt and is thrust into Daisy's world. She teaches him about horse racing; he teaches her about love. When Daisy's seamy brother-in-law threatens Nick's safety, she doggedly tries to stop him by herself, but flees to the familiar streets when he attacks. Can Nick find her in time – and if he does, will she still want him?

Five stars at Amazon “Adriana Kraft has created memorable characters that linger long after the story has ended and I’ve closed the book. She has done what an author should--brought me into the book's world and made me care about the characters so that my world will not be the same as before their foray into it.” Sheila G.
Five stars at Goodreads “…dreams can become reality, love can transcend age… Exciting, engaging and very entertaining story. The character interplay is spot on and the story is extremely well written.” Donna H.


When the Chips are Down, There’s Nobody There Daisy Matthews grew up on the streets of Chicago, and if she learned anything, it was that she could count on no one to help her, ever. She knows she has to tough it out, protect herself, and when necessary, protect anyone she cares about. All by herself. No one else will do it for her.
Hubs and I have loved writing Daisy and her story. We first introduced her in Cassie’s Hope (Riders Up, Book One) – she’s the teenage waif in the group home where Cassie worked before she went back to training horses. We’ve known so many kids like her across our social service and academic careers. There’s a special kind of resilience that comes from growing up that way; kids who don’t develop it probably don’t make it, and we’ve known some of those, too.
She doesn’t know who her father is. Her mother, who died of an overdose when Daisy was little, was a prostitute. Fortunately for Daisy, her rock-solid grandmother took her in, but that grandmother died when Daisy was eleven. Unadoptable for whatever reason, she ended up in a group home through her early teenage years, until Cassie and Clint Travers became her foster parents.
We’ve dedicated this book to two of our ancestors who faced severe social stigma more than a century ago: my great grandfather, who was born to an unmarried teenage logging camp cook in the Pennsylvania mountains, and hubby’s great grandmother, a quarter-blood Cherokee in an era when the family tried to hide that information out of shame.
Maybe we gave Daisy an extra boost when we paired her with a handsome wealthy hunk in his early forties, but we think she deserves a bang-up happy ending for her determination, grit, and courage in the face of present day social stigma. We hope you’ll agree.

“I won’t let anything hurt you.” Daisy Matthews finished wrapping the ankles of the chestnut mare and sat back on her haunches to evaluate her work. The mare’s ankles were cooler than they had been two hours earlier.
It wasn’t easy to convince a horse to stand in buckets of ice, but after three years of being a groom and an exercise rider, she could do it about as well as anybody at Arlington Park. At least that was what her boss said when he promoted her to assistant trainer.
Daisy grinned. There wasn’t much prestige associated with being an assistant trainer for a fellow with a string of only twenty-some claimers and allowance horses, but it was something, particularly for a girl from the wrong side of the tracks.
RainbowBlaze took a step forward. “I know.” Daisy groaned. “Step one: pay attention. Sorry, I got lost daydreaming.You’re right. Taking care of you is an important job.” She chuckled. “I can’t think of anything I’d rather be doing.”
“Hey kid, do you always talk to horses?”
The horse reared and pawed. “It’s okay, girl.” Daisy kept her voice soft and ran her hand slowly along the mare’s neck.
When the mare had stopped trembling, Daisy stepped out of the stall, shaded her eyes from the sun and faced the interloper. She scowled at the man’s new sneakers, monogrammed shirt and neatly pressed slacks. He looked liked he’d be more at home on a sailboat than in a barn. 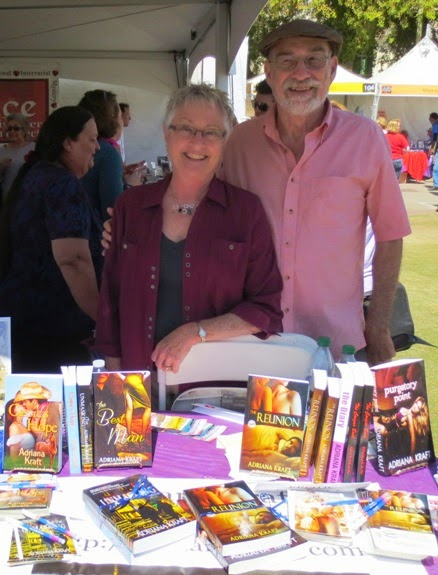 ADRIANA KRAFT ON THE WEB

Adriana is giving away a $10 gift certificate and winners choice of one download from her backlist – click on the Rafflecopter Link below to enter!

Posted by Unknown at 8:25 AM
Email ThisBlogThis!Share to TwitterShare to FacebookShare to Pinterest
Labels: Adriana Kraft, CONTEST, Spotlight, Willow Smoke