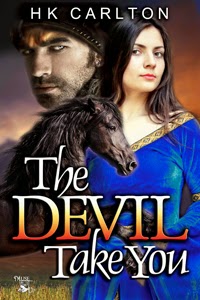 On the fifth week of Medieval Monday my guest is Canadian author H K Carlton and her historical romance:
The Devil Take You
by H K Carlton

Blurb:
I believe your stay in purgatory has only just begun...
Scotland - 1307 - During the Scottish Wars of Independence


Gard Marschand will stop at nothing in his pursuit to regain what is lost. Concealing his true identity, he will associate with his enemies, kill his own countrymen, even sell his soul to the devil if all else fails. He will lie, cheat, steal, rape and siege his way across two countries gaining power and reputation in his malevolent wake. His determination all consuming, until King Edward commands Gard to lay siege on Ross-shire holding, where Braelynn Galbraith obliterates his single-minded purpose.


Braelynn Galbraith wants peace for her beloved Scotland, marriage to her childhood sweetheart, Callum, and a house full of children. In that order. But evil incarnate in the form of Gard Marschand, turns her life inside out and destroys all hope of a decent marriage.

Can Gard abandon his deep-seated need of revenge for a love that might just save his soul, or will he succumb to the demons that hound him and surrender to the devil within?

Braelynn ran as if the hounds of hell were on her heels. They could very well be this time. She ran while she prayed. “Please God, if ya get me outta this one last scrape I promise I will ne’er pass another message ta the rebels again.”

She should have learned her lesson from the last two outings, almost captured both times. This would be her last, one way or another.

She’d been pursued many times throughout the years and always managed escape. But things were getting much too dangerous. These were not English soldiers on her heels this time. She knew not who hunted her but the steady beating of hooves bore down on her. Brae ran for the caves to lose them there, just as she’d done the day she glimpsed William Wallace two years past, days before his capture. She remembered begging and pleading with the vicar to allow her to accompany him that day. He said it was too dangerous and he himself would carry the message to the rebels; but when he’d let slip that William might possibly be at the meeting place, she threatened to follow after him if he did not simply acquiesce and allow her this.

She’d not spoken to Wallace, only gaped at him from afar. This great man dedicated as she to her country’s freedom. He had not been what she expected. From the tales people told, he was an impressive ten feet tall and indestructible. He was not ten feet tall, she’d found out that day. He looked to be just a normal man. And to her sadness he had not been indestructible. His capture and subsequent execution threw the country and her own little shire into further turmoil.

Brae rounded the burm and with an additional burst of speed made for the bluff, fistfuls of her skirt bunched in her hands to keep her legs free. But before she reached the crags, more horsemen appeared on the cliffs. The lass skidded to a halt, caught between the two. The men behind her rounded the burm. She turned, the men on the cliffs were retreating. She realized that perhaps the horsemen in chase were not after her at all.

Brae had to make a decision and fast. She chose to follow her first instinct and hide in the caves, using the darkness and the tunnels to escape as she’d done in the past.

The young woman scurried over the rocks and under the overhang, sliding through the arch that water and wind had eroded over time. Brae launched herself into the mouth of the first large cave she came to. Hiding in the dark she inhaled deeply, drawing breath after breath into her burning lungs. She listened and waited as her breathing slowly returned to some semblance of normalcy. Brae lifted her skirt and picked her way through the empty tunnels, confident now that she had safely lost her pursuers. Relief flooded her. She let out one last breath and lowered her guard.

In the next instance she found herself thrown against the slimy rocks as a stranger’s filthy hand covered her mouth. Brae squirmed and screamed into his smelly palm.

You may watch bellow the covers of all the books included in the tour: