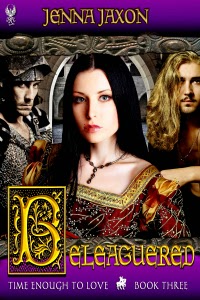 Author Jenna Jaxon is my guest for this week round of Medieval Monday tour. She shares with us a few interesting details about her novel
Beleaguered

When death holds sway in the world, can even the greatest love survive?


Finally in France, Alyse and Thomas return to their roles as courtiers to Princess Joanna.  Their passion for one another continues to smolder hot and deep—until one fateful encounter changes everything.


During a formal banquet, Alyse must share an intimate dance with Geoffrey, her first love. His searing touch proves Alyse’s love and desire for him is as strong as when they first met. Tormented by this revelation, Alyse is bitterly torn between the love of her life and her love for her husband.


Into this agonizing situation, the disaster of the Black Death rears its head, decimating the princess’s retinue and threatening all their lives.  Alyse, Thomas and Geoffrey must try to save the princess from the ravening disease but at a dire cost to themselves.  With her world plunged into chaos, Alyse struggles with her feelings for both of the men she loves.  But which love will survive?

EXCERPT
Geoffrey hurried on with a suggestion. “’Twould be the work of a few moments for me to teach it you, my lady.”


It would have to serve. She shot a look over her shoulder at her husband, who nodded and laughed with the princess though his eyes were trained on her. Best get on with it then. The sooner ’twas done, the better.


“Your skill at dancing is such that you would certainly learn the steps with but slight instruction from me.” Geoffrey leaned so close his voice, against her ear made her jump and recall herself. She stepped back and looked at him.


His practiced courtier’s smile flickered at her, and she caught something deeper shining in his eyes that she fought not to see. Her heart stuttered a beat.Her body flushed with the anticipation of dancing with him again even as misgivings swirled in her mind. No good would come of this dance, but Thomas watched closely to see that she acted cordially to Geoffrey. Would that it was an act.


With a sense of heavy foreboding, she extended her hand to him. “Very well, Sir Geoffrey. What must I do first?”


He placed her hand atop his arm and led her to their place in the circle of dancers then grasped her hand to pull her around to face him.


The moment his hand touched her skin, a streak of fire shot through her. Her mouth went dry, and her gaze flew to his face. Surely he felt that as well?


He stared back, his eyes mirroring all too clearly the blaze that coursed up her arm.


In a daze, she looked around at the other dancers, expecting them to stare accusingly at her. As if they could see this sinful feeling that tore at her soul. At a loss for how to act, she raised her gaze to beseech Geoffrey. “What do we do now?”


’Twas an apt question for, God forgive her, at the touch of Geoffrey’s hand, all thought of her husband had fled. She was back on the deck of the Phillipa, facing him once more. Loving him once more.


Geoffrey cleared his throat, his face flushed, and said simply, “Follow me.”


Then they were twirling around the circle, hands clasped, arms touching intimately, He seemed to brand her wherever he touched. The figure reversed, and her other side was scorched as if a red-hot blade seared her. Her gaze locked onto Geoffrey’s, and the music, the dancers, the Great Hall and all its inhabitants melted away until all that was left was the whisper of his breath in her ear and the heat of his body pressed close against her.


He leaned in closer to whisper, “I must lift you now.”


Before she could grasp that staggering news, his arm went around her waist and he lifted her, twirling them around full circle. She panted, blood pounding in her temples, roaring in her ears.


They continued to dance, but she moved as though she were a doll made of rags, her legs barely able to stand. Her world narrowed to the single source of light and life that was the man who held her in his arms again. The man whose love she could no longer deny. Despite the agony of the betrayal, in the core of her being she knew neither the vows she had spoken to Thomas nor the passion they had enjoyed in his bed would ever match the intensity of love and belonging she shared with Geoffrey. As soon compare a candle’s flame to the sun.