I am posting today my review on Mae Clair's romantic suspense novel - The Twelfth Sun.

The hunky young PhD knows all about seduction, but what does he know about love?
Reagan Cassidy is settled in her life. She has a thriving interior design firm, an upscale condo, two cats, and a goldfish. As a favor to her uncle, she agrees to team up with his marine archaeologist friend to validate and retrieve a nineteenth-century journal, reputedly that of a passenger aboard the doomed schooner Twelfth Sun. Finding a hunky twenty-five-year-old coming out of the shower in her hotel room wasn't part of the deal, but it's hard to complain...
Dr. Elijah Cross is cocky and he knows it. He enjoys trading barbs with the lovely Reagan. Barbs, and some innuendo. He can tell she'd rather get back home to her business than stick around for the extended treasure hunt they've been talked into, but he's fine with the situation. At least, until the 'clues' start getting personal.
Reagan finds Dr. Gorgeous is as skilled in matters of the heart as he is behind the lectern. Throw in a series of clues which mean more to Elijah than he'll explain, several odd-ball competitors out to win the journal, a saboteur, and a lavish seaside mansion, and Reagan has enough trouble keeping her head straight, let alone her heart.
WARNING: Younger man, older woman, nautical riddles and romance.
A Lyrical Press Contemporary Romance 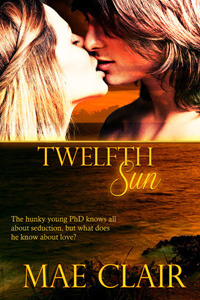 
Main protagonists:
Regan Cassidy – ”At thirty-five, with a flourishing interior design business, upscale condo, two cats and a goldfish, she didn’t need a man to complicate her life.” But, as she says, "Life had a way of defining and establishing priorities. She was glad hers had included taking a chance on a treasure hunt spun around the search for an obscure journal."
Dr. Elijah Cross, far younger and sexier than she’d anticipated - he was only twenty-five. Owner of a doctorate in marine archaeology.

Mission –to find Rook’s journal. He survived at sea for forty-five days before he was picked up by a cutter out of Gloucester. And be able to verify the authenticity of the journal and assure it came from the Twelfth Sun clipper.

Twelfth Sun, a story full of mystery and romance, kept me glued to the pages. Having already read all the author’s published books I knew I was in for a great adventure trip. I was right. There were moments when I felt I was in the middle of an action movie, so suggestive was the description and thrilling the action. From the witty dialogue that moves the story ahead and the atmosphere of danger and suspense, to the chemistry between the protagonists and the unexpected twists in the plot, the book offers readers several hours of pure delight. The intricate plotting weaving history, folklore, mystery and romance in the edge of your seat story is worth five stars. Twelfth Sun is a novel I thoroughly enjoyed and I highly recommend to fans of romantic mystery. As well as Eclipse Lake, Solstice Island and Myth and Magic, all novels of this gifted author, Mae Clair. My rating: