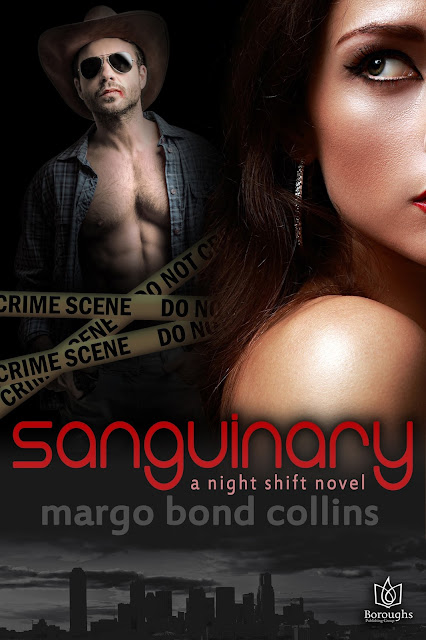 When Dallas police detective Cami Davis joined the city’s vampire unit, she planned to use the job as a stepping-stone to a better position in the department. She didn’t know then what she knows now: A silent war rages between humans and their supposedly pacified predators, and the vampires are winning. With the clock running out on her kind, Cami will do whatever she must to defeat the “Sanguinary.”

Enter Reese Fulton, a disaffected ex-cop and a vampire. She can’t exactly trust him, but with his cowboy boots and good-ole-boy drawl he’s the perfect beard for Cami’s fledgling undercover operation. Yet playing Reese’s Claimed—a vampire’s personal bloodgiver—isn’t as straightforward as she was led to believe. His bite is as enthralling as his dimpled smile, and soon Cami is wondering which will pose more of a challenge: subduing the enemies of humanity...or her own desire.
Buy Links:Boroughspublishinggroup
Amazon
Barnesandnoble
Allromanceebooks
Createspace

“Hey, Bradley.” I beckoned the crime-scene tech, who had finally arrived and was snapping on gloves. “Is that a piece of paper under the vic’s head?”
He bent down over my shoulder to get a clearer view from my line of sight. “It’s tangled in her hair.” He pulled a pair of long tweezers out of his kit and snagged the sliver. “Yep. There’s a word written on it.” We both peered at the brownish, spidery writing.
“Sanguinary,” I said. “Is that written in blood?”
“Maybe. I’ll get the lab to run a basic analysis on it. If it’s blood, we’ll be able to let you know pretty quick if it’s human and, if so, what type. DNA will take longer.”
I stared at the woman a little longer. Her dark hair—almost the same color as mine—spilled out around her, matted with dark, coagulating blood. The two bloody marks on her neck shone like black stars on a white background.
Vampire.
I knew that if I lifted her dress, there would be other puncture wounds all over her body, and strange symbols carved across her skin: pentagrams within circles and other ritualistic signs. Exactly like the others. Ten murders in the four weeks since the beginning of September—all centered in downtown Dallas, and many of affluent victims whose families demanded action.
The department had been in a barely suppressed uproar.
I stood up, my knees popping a little. Five years ago, they wouldn’t have done that.
And five years before that? Vampires hadn’t existed, except in books and B movies.
It took time for the world to believe. We hadn’t even realized how to fight back when they’d first shown up.
This victim’s ragged, bloody fingernails suggested she had tried to resist but obviously failed.
The red dress she wore would have originally matched the color of the relatively scant splashes of blood surrounding her, but those stains had dried to a muddy brown, the same color as the writing on the paper caught in her hair.
Her clothing suggested she’d been at the opera that evening, though the manager, roused from her bed, swore that the building had been cleared and empty when she left.
One black, high-heeled pump lay several feet away, toppled over onto its side, the heel broken, as if she had stumbled out of the shoe when it failed her as she ran from a pursuer.
Sanguinary.
This was the third time the word had shown up in the case. The first time it had been left in a victim’s voicemail by a man calling from an untraceable burner phone: “The Sanguinary expects you at the Blood House tomorrow night.”
The second time, it had been part of a to-do list in a victim’s day planner: Meet with vampire admin. + Sanguinary.
I’d heard the word even before that from vampires I had taken down—whispered as a threat, shouted as a warning: The Sanguinary is coming. The Sanguinary will kill you all.
But no one who knew what the Sanguinary was would admit to it.
That’s why I was about to go undercover among the vampires.
Find more about Margo here:http://www.MargoBondCollins.com