I am delighted to welcome today E  Ayers with a guest post on Halloween and a book that perfectly fits the topic.


Thanks for inviting me to your blog. It’s October and I always think of it as the death month. Morbid? Maybe. But it’s sort of the natural cycle of life. Just as so many annual plants have succumbed to a frosty death, and the leaves fallen from the trees, that cycle is repeated with humans. Over the years, many friends have buried their aged parents in the month of October, and my own parents and in-laws, many years apart, were buried in October.

Is it something leftover from when we first walked the Earth? Before the winter cold struck and froze the ground to the point when burial was impossible? I’ve asked a few doctors about it. They get that deer-in-the-headlamps stare as they ponder the question. Most have responded with an affirmative about death striking the elderly more frequently in September, October, and November. Then others give that politically correct answer that there is no such thing, and it’s an old wives tale.

So here’s my question to those in the southern hemisphere, do you have more deaths of the elderly in your autumn months?

Somewhere back in time, my ancestors celebrated All Hallows’ Eve, and before that, Samhain. (Commonly pronounced sow-win or sah-when depending on dialect - I've detected a dozen pronunciations of the time frame but none are pronounced sam-hane, which is what is commonly heard today.) Samhain marked the end of harvest. Only two seasons were recognized back then, summer and winter. People believed that the spirits were active after the harvest, possibly concerned that their families had enough to survive the winter. It was also believed that the spirits created a little mischief for those who didn't measure up. A chair was brought to the table for those past relatives as a way of showing off the bountiful harvest, hoping to appease the spirits of those who once lived. No one wanted to be harassed by the spirits of the past.

Over the years, the tradition evolved. Samhain was replaced with All Hallows’ Eve, which Christianity pushed to the side, and the evening became the Eve of All Saints’ Day and a time to pray for past relatives, martyrs, saints, etc. (Was that a surprise?)

Come forward to modern times and we have Halloween and it has become a holiday for children, no matter how young or old! Here in the United States, some families go all out to decorate their porches and yards. Children Trick or Treat or go to Halloween parties. Dressed as their favorite princess, TV or movie star, cartoon character, or superhero, the children roam their neighborhood looking for houses giving out candy and catching up with their friends.

Even the idea of dressing in costume for Trick or Treating has its roots in pagan times. During Samhain, they called it guising or mumming. And the people who did it went door to door reciting poems and asking for food while they carried a turnip that was hallowed out and made into a lantern. Slowly that tradition moved to the English Boxing Day when people were visiting with family and neighbors.

Early American immigrants brought the traditions with them. It didn’t take long for the good-natured fun to spread from small pockets in the cities to the outlying areas, small towns, etc.

It was in the late 1700's and early 1800’s that the mumming in the USA got a little rowdy with lots of gunshots, etc. There were several attempts to outlaw it. A compromise was finally struck, and the adults who embraced mumming were forced to become organized groups with permits to “parade.” That’s really when Halloween became a child’s holiday.

In Philadelphia, Pennsylvania, the adults who carried on the tradition of mumming became known as "Mummers" and paraded on New Year’s Day, known as the Philadelphia Mummers Parade. It is a joyful event filled with music and dance. Those mummers spend an entire year creating costumes and practicing while playing instruments or dancing in those elaborate costumes that often weigh several hundred pounds.

It's been hundreds of years from the pagan harvest festivals to today’s Halloween and the Mummer’s Parade; things have evolved but not that much. We just don't worry about appeasing our ancestors. But the cycles in nature have remained. We decorate our homes with fall harvests of pumpkins, squash, apples, and the colorful leaves of the season. Our children dress in disguises and go door-to-door looking for treats. The culmination of autumn and harvest is celebrated with Thanksgiving. And we refer to our elderly as being in the autumn of their lives.

When my time comes to leave this world, I hope it is in the autumn. I don't want to go in the cold, bleak winter, or during the spring, which is always filled with hope of a new season. Nor do I want to go with fireworks in the blasted heat of summer. Let me go surrounded with nature's last hurrah of my favorite colors, as we settle down to face the winter. Let the Mother Nature's natural cycle be mine.

I love the autumn months, and they are filled with personal highs and lows. A few years back, I jumped at the chance to write a fall romance. And considering I met my husband in October and married him in November, I happen to think autumn is a very romantic time. A Skeleton at Her Door is that fall romance. It's filled with some Halloween fun, a dash of sexy, some serious moments, the joy of family for Thanksgiving, and a whole lot of love! 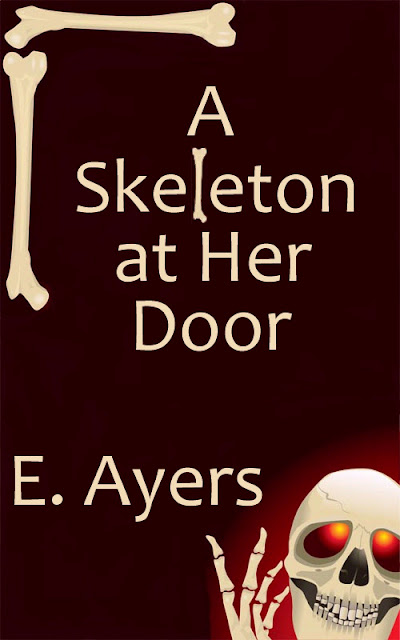 Buy link  Amazon
About the author
E. Ayers is a multi-published and Amazon best-selling author of western and contemporary romances. Her books are never too sweet or too hot. She writes down the middle. She is proud to be part of the Authors of Main Street, an elite group of award-winning and best-selling contemporary authors.
You can stalk the author here:
Twitter
Shared blog
Blog
Newsletter

Posted by Unknown at 12:00 AM
Email ThisBlogThis!Share to TwitterShare to FacebookShare to Pinterest
Labels: A Skeleton at Her Door, Guest Post E Ayers, Halloween, romance