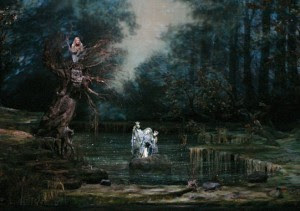 Romanian mythological lore is fascinating, rich,  magic and,  at the same time,  intriguing.  Yes, intriguing because of the people’s inconsequential attitude toward the fantasy creatures they worshiped along the centuries.  Are Dragaicele to be considered Iele – wicked, cruel faes, or are they good fairies who protect crops, peoples’ prosperity?  Is the Sambata river(Saturday’s river) flowing from the human world or from hell?
Water in Romanian mythology. Together with air, fire and earth, water was and still is one of the basic elements that formed the world. Water is a permanent element in all fairy tales, legends in Romania.


The importance of water dates back to ancient times. Our ancestors, the Dacians had solemn rituals before leaving to battle. They bathed and drank from the waters of Istru river( present day Danube). Later, after  the Romans conquered Dacia even the Romans worshiped Danubius waters bringing offers to it to gain the benevolence of the God of the river.


There’s also a hidden tradition of the Romanians linked to water – hydromancy or water divination. It was a secret that came down from generation to generation and only well selected people mastered it.


A careful study of our ancestors’ mythology  will allow us to discover the Living Water. Many legends and tales speak about the Living Water that will heal the main hero who is slyly killed by his enemy. The Living water is found in inaccessible places , "where the mountains clash their heads”, and getting it is a hard task as the mountains will stop only once a day.
Waters' Fae. Today I will present an interesting mythological creature Stima Apelor – the Waters’fairy/Fae/Pond’s Woman, a kind of  Romanian siren.  She  presides over fountains, wells, springs, streams, brooks and other bodies of fresh water.


The etymology of the word  STIMA seems to come from the Greek  - Hiero Stoma – the sacred mouth that refers to the main flowing mouth of the Danube - RO STOMA – Stima. In the Greek and Roman mythology there’s an equivalent for the Romanian Water Faes – the Naiads, nymphs.


She is the one who, depending on her mood, can lead to great drought or  flooding.  Described as a beautiful,  wild, woman with long,  green-blue hair and alluring eyes, half woman half fish, she attracts young men to drown them.


From time to time an angered Water  fae comes out of the river or lake flooding everything on her way – people and animals alike. After she calms down, she returns to her home.


During drought time the water fae hides deep under water. She comes out at midnight and  asks in wild cries for a man’s head. The person who is destined to die, goes straight to the water. Even if other people try to stop him, he struggles and shakes them off.  If people manage to stop him, he  begs them to allow him to  wet his feet, at least.  As soon as the water touches him, he dies. 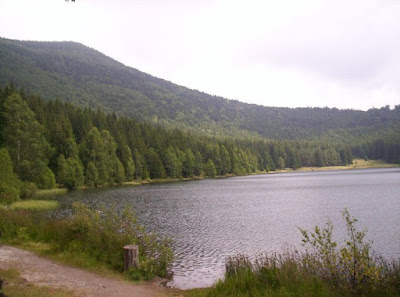 People say that there’s a Water Fae in the famous St. Ana Lake, in the image above, the only volcanic lake in Romania. I will have a post on it, and the legends around its waters another time.