Please welcome Adrienne Woods to Paranormal Romance Thursday! I’m thrilled to introduce her, since Adrienne comes from so far away, from South Africa.  Her book, 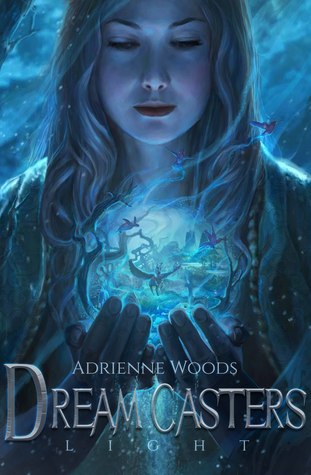 Blurb:
Mr. Sandman, send me a dream, ta da da da…..Seventeen year old Chasity Blake knows the Sandman is just a silly children’s story parents tell their children to get them to sleep. At least she thought it was, until the day a mysterious, light golden sand appeared in her hands during a high school prank that went horribly wrong. A sand that has the power to send anyone it touches into a deep, sound sleep.


Fearing she had lost her mind, Chasity soon discovers the shocking truth of her heritage- she is a Dream Caster. Chasity was never supposed to be raised on the Domain, or what humans call Earth and she is determined to return to her true birth place, Revera – the world of Dreams.


However, in Revera there is no balance between good, the Light Casters, and darkness, the Shadow Casters, and Chasity is caught square in the middle. She soon learns that there is no place for anyone containing both the light and the darkness within them, and the shocking truth that if anyone in Revera ever discovered her shadow self, Chasity would be thrown into the Oblivion – the world of Nightmares.


Dreams are always more than they seem, and this time Chasity is going to discover just how different they can be.

A mixture of cologne over powered me as the four guys stood really close to me. Their hands touching my arms and clothes.
Then I saw the grit in my hands again. It was soft, not like sand, and it had a light golden color to it.
At once the slow motion stopped and I threw a handful of the stuff, hitting Mark full in the face. He crouched and tried to get it out his eyes. I felt more sand in my hand and Jake was next. I didn’t know where it came from or how any of this was even possible, but right now that didn’t matter. As I threw a handful at each and every one of them, a refill was waiting patiently in my palm.
Derek was next and before I knew it, all the boys were coughing and crouching down. Then one by one they fell over, in a fetus position with eyes closed and soft snores coming from their lips.
Clare and Ty ran to the guys and crouched down. Ty felt for a heartbeat, but from the sound coming from their lips I knew they were still alive. I waited for men with cameras to jump out from behind the trees, yelling GOT YOU or something but it didn’t happened.
The fear on both Ty and Clare’s faces were real.
“What did you do?” Ty yelled.
“Nothing they didn’t deserve!” I yelled back hoping he would just back the hell off.
“You’re a freak!” Clare yelled, and stormed at me. More sand accumulated in my hand, but to me, she was still my best friend, one whose mind had been closed by the idiot that was busy running away.
I opened my palm and let the grit fall to the floor. A breeze picked it up and blew it softly into Clare’s face.
She stopped in her tracks, give a huge yawn and lay down on the ground.
Was she sleeping?
I looked at my hands. The grit was gone, there weren’t even traces of it inside my palm, nothing made sense.
“Just go,” Nichole said as she crouched down next to Clare to investigate.
I stood still as a statue trying to process what was happening to me.
“Chasity!” Nichole yelled again. “Go!”
I  looked down at Nichole. My legs finally started to move into the direction of home, and grabbed my backpack that had fallen on the turf.
I reached the city of Chicago fast and almost ran into a police office that was chatting to one of the waiters. Guilt over what I’d just done was evident on my face so I ran in another direction.


“Hey, you there, stop!” He yelled.
I didn’t listen and he chased me for a couple of blocks but he had probably had one too many donuts on a daily base and couldn’t keep up. I took so many turns down back alleys that when I finally stopped I had no idea where I was.
I breathed hard, trying to catch my breath and looked back at my hands. The was still no trace of the grit. It had just vanished. My heart beat fast again and cold sweat dripped from my temple as flashes of ogre-like bodies, almost the entire football team, falling down right after I threw the grit at them came to mind. Coach was not going to like this, and how was I going to explain any of it to anybody?
What the hell did I just do? I glanced at my hands one more time. What the hell was happening to me?
Find the author here: https://woodsadrienne.wordpress.com/