You know me as a fan of ghost stories so I’m absolutely looking forward to this novel. 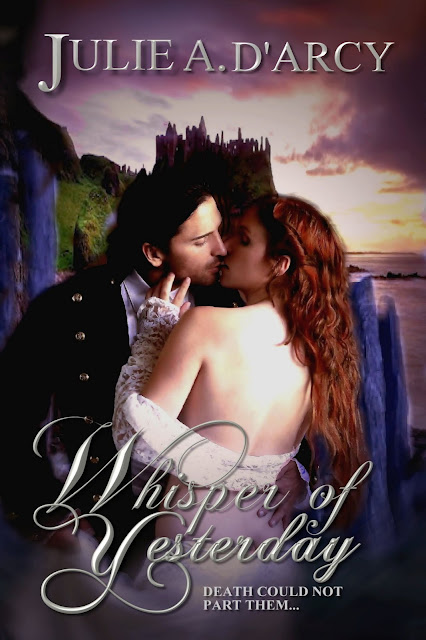 A cry for help, echoing through the ages, inspires a young nobleman to


rewrite history– and rediscover a passion he had only dreamt of…


Cole d’Morgan is contacted by a lawyer telling him he has been left a castle in Cornwall, but to inherit he must arrive at Castle Thornwood on All-Hallows-Eve.


As he pulls his car to a halt at the castle gates he sees a beautiful red-haired woman clutching the bars in the rain. However, before he can climb from his car she vanishes into the night.


Alyssa d’Morganburned as a witch for refusing to wed her dead husband’s father in 1644 haunts the castle where she was put to death. She has sworn she will not rest until she is reunited with her husband and soul mate, Cai.


Aidan d’Morgan, re-incarnated soul of Caid’Morgan is reborn in the 1800’s and wins back Castle Thornwood on the turn of a card.


On entering the castle he cannot shake the feeling he is being watched, and soon learns that the castle is haunted by a beautiful red-haired woman who speaks to him in his dreams. However, these are not simply dreams, but a past life, which he is forced to revisit in order to find an answer to an age old curse…


What transpires is an interwoven tale of chilling betrayal and a haunting love story that traverses three centuries...


Aidan stared down into the courtyard. All was darkness. Nothing moved. Not a night creature called. He swung to face into the room. It was lit by only the faintest of moonlight and a low-burning fire.
It had to have been a dream.
Naked; the breeze was cold, but sweat still trickled down his back. He stared down at his hands. They trembled. “It was a dream.” If he repeated the words emphatically enough, perhaps he would believe them.
He ran a hand through his hair. He had been in Cai de Morgan’s body. He had seen what he had seen, done what he had done, and thought what he had thought. It was as if he was a spectator in another time and all had been beyond his control. Yet as incredible as it was, he had been there. And who was Cai de Morgan? What was the man to him? And more so, who was the woman? Why did she remind him so much of the woman in the fire? Countess Llewellyn, the woman who supposed to haunt this castle?
He strode to the dresser, lit a candle, and crossed to the large freestanding mirror in the corner. Critically, he viewed his features. Was it his imagination, or was there the slightest hint of another image superimposed over his own? Did the face look more angular, the jaw harder? He held the candle closer to the glass, and a chill prickled the back of his neck. The hair on the man in the mirror waved and curled past his shoulders, and there standing behind him was a woman. A woman with a riot of deep red hair, brilliant emerald eyes, full lips, and fine brows—a woman with the face of an angel—the woman in his dream. His hand tightened on the candlestick. It felt as if it were frozen; his fingers glued and could not be uncurled.
She no longer wore the yellow gown and headdress, but instead the white shift she had worn the first night he had seen her amidst the fire in the courtyard.
Their eyes met and held in the reflection.
He swallowed, trying to free up his throat, trying to force words that would not come. As he watched, she drifted closer, yet no step could he hear on the polished wooden floor.
“Who are you?” he managed at last, his words a strained whisper. He twisted around. She vanished. He swung back and stared into the mirror. She stood behind him with a look of accusation in her green eyes. It was as if he was a moth and she pinned him with her diamond bright gaze. “I’m sorry,” he said. “But I had to be certain.” He spoke quietly, afraid to raise his voice least she disappear. “Will not you speak to me? Will not you tell me your name?”
She opened her mouth, and just a soft sound issued forth, almost a sigh, as if it was coming from a long distance. “Cai.”
Cai. Had she said Cai? The man in the dream had been Cai. The man whose body he had inhabited for a short time. Inhabited. The thought disturbed him, but he could think of no other word to describe the happening. Was he going crazy? But no crazier than seeing and talking to a ghost. Again he wondered what Cai de Morgan had to do with him. How Cai was connected to the murdered Countess.
“I have so many questions,” he said, holding her reflection in the mirror.
She moved closer, pressed her warm soft body to the length of his back, and encircled his waist.
His mouth went dry. He couldn't swallow. He had always thought a ghost would be cold, but he had never felt such heat as that which now filled his body and hastened to pool in his loins at the soft caress of her silken hair and the touch of her hands on his sweat-damp skin.
She leaned her smooth cheek against his shoulder, and his body hardened with desire as she tilted her head to the side to watch him for several painful heartbeats through sooty lashes, her eyes dark, intense, wanting.
Suddenly he swung to seize her, but his hand passed through a draught of cold air. Goose bumps raced up his arm. She was gone, and he cursed himself for a fool. He should have known better than to try to capture something as elusive as an angel...