Peril at the lake. What could be more fun than a relaxing walk through the quiet forest, and then  a rest on the shore of a lake whose waters are bluish-green as if the sky and the sea mingled their colors in the its waters? Well, for those not familiar with the legend, everything might seem idyllic. But don’t let yourselves lured and jump in its waters. 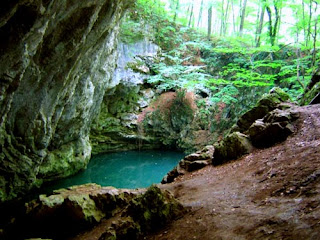 Situated on the left bank of Nera river, near Sasca Montana, Caras-Severin county, this lake appeared after the roof of a cave The Devil’s Cave, collapsed. Its surface is of about seven hundred meters, which makes it the largest karst  lake in the country. Its depth is of about nine  to twelve meters.

Can the legend  have a seed of truth? The bluish- green color of the waters is quite impressive. The people who live in the area say that the lake is in fact bottomless and that there are many underwater tunnels. Furthermore, those who dare to take a swim in its waters never return on the banks. 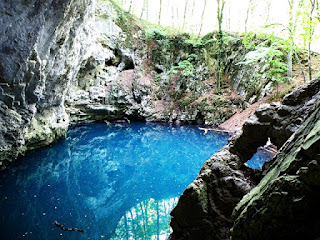 When reaching the Devil’s lake, after a tiresome walk, you may feel a


state of euphoria but, no matter how inviting the water looks, don’t let yourselves lured to enter the lake. You may never know… there is certainly some truth behind the legend.

What brought the name The Devil's Lake. The  name of the lake came like this: the legend says that one day a man was fishing in the lake. The devil, taking the appearance of a man comes and asks the shepherded to fry a fish without the fish bending its tale. (It’s well known that while frying, the fish takes a curbed form). The shepherded tells the Devil whom he recognizes that he will do it if he can fry a goat’s head without the teeth being revealed(it’s also known that while frying a whole head of the animal the lips will open and reveal the teeth). The shepherded takes the fish and puts it on a spike and thus he manages to fry it and keep it straight. The Devil, no matter what things he tries he doesn’t manage to do what the shepherded asks. Angered the Devil  jumped in the waters and ever since the lake is called the Devil’s lake.


Old wise women say that if you give a person who betrayed you to drink water in which you add some drops from the lake's water, that person will soon find his/her death. Hm! What do you think? A bit too drastic, in my opinion.