Underlayes is another dimension where all sorts of nocturnal creatures reside; witches, vampires, fae, shifters, werewolves…… The dimension was created by all of these creatures working side by side to escape the scrutiny and danger to their very existence that stemmed from the human world. Humans tend to fear things they do not understand and tend to try and eliminate anything that they fear. Even though these nocturnal beings were actually humanoid themselves as well, just different, more enhanced, than their day bearing brethren...
Amongst those beings lies a very powerful witch, Tialanna, who is to become the queen of all Underlayes witches.
Thinking the worst part of her life was the fact that she was betrothed to a complete stranger while in love with someone else. She is in for a rude awakening when she discovers the truth of who, and what, she truly is.
Tialanna is about to learn the truth behind several lies, because not only does her life depend on it, but so does the fate of the family she never even knew she had. But hey, life would probably just be boring if she didn't have to deal with elemental witches, vampires, demons, sorcerers, bindings, spells and whatnot, right?
***This book is intended for mature audiences only as there will be both graphic violence and graphic sex.*** 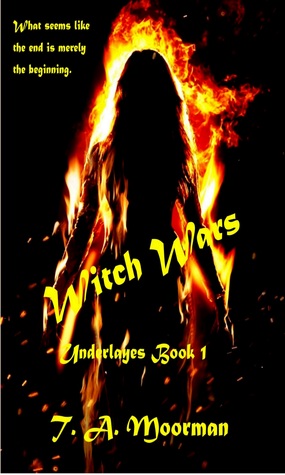 Prepare to be swept away by a perfect adventure fantasy for anyone with a big imagination. Witch Wars is full of adventure, remarkable characters, dangerous quests, and of course love.
One thing I look for in books is original, unpredictable storytelling because I like a book that pulls me in from the first page and doesn't let me go.Witch Wars is a beautifully written book with perfectly crafted sentences that flow without conscious thought. From the very first chapter I was swept into Tialanna 's story. Tialanna, a powerful witch destined to become the queen of all Underlayes witches. To me, she felt like a real person with both strengths and weaknesses. There were times when I admired her guts and determination, as well as times when she made mistakes which added to her vulnerability and ultimately gave her real dimension.  The writing is beautiful, T.A. Moorman definitely has a talent for crafting words to draw the reader into the mysterious world she creates. Her characters have personalities and flaws, and I loved watching Tialana character grow.


As I keep my reviews SPOILER FREE  that’s all I reveal. Read it, you will not be disappointed.