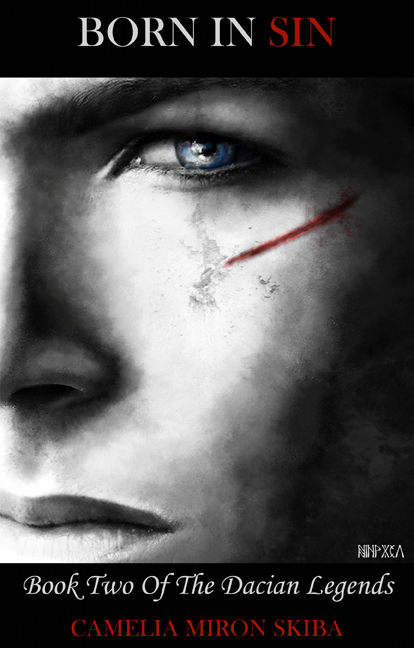 Loathing the thought of his beloved Oriana in the arms of another man, fearless Zyraxes delivers death upon the Roman enemy. With only the rugged land as his bed and the sky as his blanket, trouble finds him often.


Summoned to aid Oriana’s father in the war against two powerful enemies—one of them Oriana’s savage husband—Zyraxes proves himself worthy of more than just noble titles and coin. But he wants none of it. What he wants is her.


When Zyraxes discovers a broken and nearly dead Oriana, though forbidden, he disregards her father’s orders to leave her to her death, and instead chooses to protect and conceal her. Will saving her be enough to win her heart? Will his part royal lineage make him worthy of her love?


I read first Born in Vengeance and was anxious to see what happened next. I liked the historical part quite a lot.  As a native of Ilias's and Zyraxes's country I was able to see in my mind's eye the places the characters traveled around.  Though you'll meet again Ilias, the main character in Born in Vengeance, Born in Sin focuses on Zyraxes's feelings.

The first pages begin with the aftermath of a huge battle that has just ended - blood and death.

The characters are interesting and unique, and I commend the masterful way Camelia Skiba describes how they get to be where they are and makes their connections throughout a very well written story and original design.

The author kept my interest by telling the story from Zyraxes's POV, at the same time introducing me to the ancient times of the action by means of meticulous details. Zyraxes tries to reconcile duty and love. How he manages it, if he succeeds or not, you'll have to find it for yourself. All I can tell you is that the love story in Born in Sin is an intricate one. I highly recommend this extremely engaging book to fans of historical fiction. They won't be disappointed. I give it five stars!