Book Review: THE REPROBATE by Dorothy A. Bell 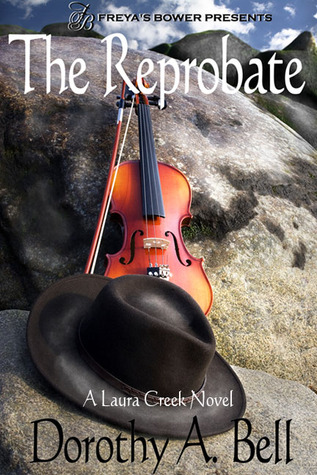 An Oregon Historical Romance
Fiddle playing, hard drinking Royce O’Bannon believes he’s worthless like his old man, no woman should have anything to do with him.

Music teacher Cleantha Arnaud, her virtue long spent, believes her life is over; crippled and barren, no man would want her.

When the two outcasts become lovers, hopes and dreams blossom within their parched souls.

Royce’s vengeful daddy begins a campaign of retaliation against his traitorous sons and the town that gave them a second chance. Now Royce, feeling the weight of responsibility thrust upon him, follows his daddy into the dark tunnels beneath Pendleton’s streets to stop his old man from his path of destruction. With a swift crack on the head, all of Royce’s newly found hopes and dreams could be shattered like candied glass.


MY REVIEW
Laura Creek, a relatively peaceful small Oregon town, is troubled by the attempt to kidnap the sheriff's future bride Wren. With their minds clouded by the booze they ceaselessly binge, the wrongdoers fail. The O'Bannons, whose logo is, 'the O'Bannon men had to live hard and play hard,' are arrested and face trial for their deed.

Kind hearted, the victim, none other than their own cousin, Wren Longtree, offers them a meal and, to Royce and Quinn, an alternative. Hard years in prison or work for her and give up their life of thugs.

The Reprobate is the story of Royce, a self-proclaimed reprobate, a good for nothing young man and a lost cause. And it is the story of Cleantha Arnaud, a wounded bird, beautiful and, fragile. I enjoyed the depiction of Royce's character, his evolution. I won't tell too much as I hate spoilers. But he's human in everything - his bad as well as his good parts.

I also liked how the author, Dorothy Bell, builds up the relationship, the emotional link, between Royce and Cleantha, his goddess - slowly and beautifully - from friends to lovers. Two characters different and yet similar in many ways.

All kind of obstacles are thrown in their path, starting with her father's disapproval of Royce, “What I am trying to say is that Royce O’Bannon is not worth your time. You deserve better...far better. He’s a lone wolf. Don’t be fooled into thinking all he needs is a good woman to change him. A wolf is a wolf."

You can relate to the characters and story in many ways and I think this is an important element in a good story.

The author masterfully combines action, adventure, conflict and sentimentalism. If you are fans of western stories, spiced with the right amount of romance and history, then you will like The Reprobate. I absolutely enjoyed the atmosphere of the rough old West. As I read the description of the town, 'a bank, a mercantile, a telegraphic office and a sheriff's office', images from every Western movies I’ve seen came to life in my mind.

A story worth Five Stars.

Posted by Unknown at 12:28 PM
Email ThisBlogThis!Share to TwitterShare to FacebookShare to Pinterest
Labels: action, adventure, conflict, Dorothy A. Bell, The Reprobate, western