Book Review: One Day in Budapest by J.F. Penn

Blurb
A relic, stolen from the heart of an ancient city.
An echo of nationalist violence not seen since the dark days of the Second World War. 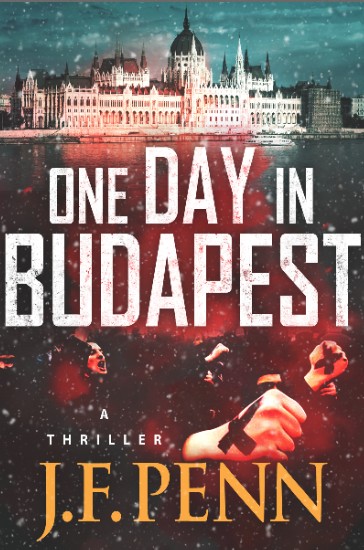 Budapest, Hungary. When a priest is murdered at the Basilica of St Stephen and the Holy Right relic is stolen, the ultra-nationalist Eröszak party calls for retribution and anti-Semitic violence erupts in the city.
Dr Morgan Sierra, psychologist and ARKANE agent, finds herself trapped inside the synagogue with Zoltan Fischer, a Hungarian Jewish security advisor. As the terrorism escalates, Morgan and Zoltan must race against time to find the Holy Right and expose the conspiracy, before blood is spilled again on the streets of Budapest.
One Day In Budapest is a chilling view of a possible future as Eastern Europe embraces right-wing nationalism. A conspiracy thriller for fans of Daniel Silva, where religion and politics intersect.
The novella features Dr Morgan Sierra from the ARKANE thrillers, but is stand-alone and can be read separately from the ARKANE series.
My Review

As an European citizen myself and, as I can say I lived history - the fall of communism in Europe and that of the Iron Curtain - and as a witness of what is happening right now on the political, social and economic scene in all the former countries of the Warsaw's treaty, I was highly interested in reading  Ms. Penn's novella. It was highly rewarding.  I read it in a go. I thoroughly enjoyed it. A real page turner, fast paced with believable characters, full of twists and turns. The plot interweaves Budapest's past and present in an interesting informative way.


I commend the author for the skilful way of building the suspense and for developing Dr. Morgan Sierra, the main character; a woman who knows how to fight her battles so as to be a winner. She's the type of character I enjoy reading and seeing in action. The only fault in this story - it ended too soon; as always happens with novellas. The story will not disappoint fans of thrillers; it's spiced in a clever way with the right amount of religion, politics and crime, to give an excellent story. It deserves five stars.