Tears of Heaven  by R.A. McCandless 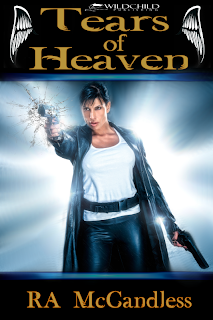 In the past, the children of angels and humans, the Nephilim, were allowed to lead their lives as they willed. But they proved too strong, too ambitious, and too cunning for their own good. They became warlords, conquerors and emperors. They caused war and strife until the Throne stepped in and forced them to submit to Its will, or die. Unlike most of her fellows, Del, one of the first Nephilim, had no interest in conquest and domination. In the ancient past, prior to the Throne’s interdiction, she met and fell in love with Dami, a Mediterranean ship captain and trader. Together, they face down pirates and storms and try to create a future together. In the present, Del unwillingly works for the Throne, obeying the commands of the angel Ahadiel. She helps to keep the world safe from the horrors of escaped demons. At the same time, she keeps herself in the Throne’s good graces. Whenever a rogue demon breaks free from Hell, she and her partner, Marrin, another Nephilim, work together to banish it.
Thrilling danger, fast-paced adventure, high-seas action, and heart-warming romance fill this novel, with a page-turning story that won’t let you put it down.

I can honestly say that Tears of Heaven is one of the most original and affecting stories I have ever had the pleasure of reading.
Like any urban fantasy novel it is set in the real world involving the coexistence between humans and paranormal creatures.
As the author, McCandless, states in the story, meeting an angel is the scariest, most life-altering moment of any mortal’s short existence. Del is a perfect example.
The plot unfolds on two planes - past and present. I confess I enjoyed the past story more. In past times, 223BCE, the main character Del, is a slave tall, proud, strong, beautiful, wearing only heavy shackles, traded to Damascus aka Dami for twenty-nine shekels.
In present day, Omedelia bar-Azazel, is an assassin for the Throne. In comparison with mortals, who bred and birthed like rabbits, there were only a few like her, half-breeds born of disobedience and lust. She hunts and kills rogue divinities. She receives a job that she doesn't like. Yet the Throne doesn’t care what Del likes or doesn’t like. The Throne’s interdiction made abundantly clear, likes or dislikes, failure or success, she existed so long as she was useful. Omnia glorium Solii- All for the glory of the Throne. Her fee will include exclusion from the List for an additional five years.
Del's hand-to hand combat and the pirate battles reminded me of the many beautiful role-play games I used to play, or of a  movie series dear to me -Highlander.
Tears of Heaven is a gripping, dark, and gritty read that not only keeps you constantly in suspense; it psychologically melts you and your emotions with every chapter. As the plot thickens, you are compelled to read the next chapter, and it feels like at any second a major plot twist can happen. Tears of Heaven is an on the edge of your seat novel that keeps you begging for more. The entire book has a spontaneous energy that works very well because you never quite know what is going to happen next.
I was offered a book by the author, in exchange for an honest review.

Posted by Unknown at 4:11 PM
Email ThisBlogThis!Share to TwitterShare to FacebookShare to Pinterest