The Shaman’s Temptation
by Erin Moore 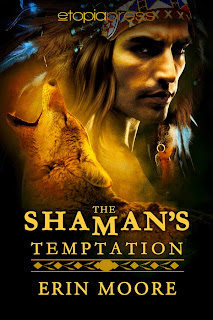 Madeleine Greenway, perfectionist and analyst for Surety Bank, has no place in her rigidly organized life for something as unpredictable as a man, much less a Native American shaman. Sent to the White Mountain reservation to help the tribe finance its new casino, she meets Tak, a proud, beautiful Apache, and finds herself surrounded by something magical in the Arizona desert. His touch becomes a passport to otherworldly bliss, and the strange coyote she sees makes her question what’s real. But it’s the amazing sex with Tak that makes Madeleine lose sight of her goal—to guarantee that Surety Bank’s investment in the casino won’t fail.
Last in a long line of shaman shape-shifters, Tak Nah-Kah-Yen has sworn a vow of celibacy to his gods. But Madeleine’s lithe body and honeyed lips compel him to forswear his pledge, claiming her for his own. His passion for her overshadows his link to his gods at a time when he most needs their help. Desperate to find funding for the casino and lift his people out of poverty, he’d accepted start-up money from less than savory sources who are willing to kill to guarantee their profit—the profit Madeleine’s bank jeopardizes…


My Review
Erin Moore takes her readers on a pleasant journey and engages as many of their emotions as possible in The Shaman's Temptation.


Madeleine Greenway, analyst for Surety Bank, sent to the White Mountain reservation to help the Apache tribe finance its new casino and Tak, Native American shaman, who had sworn off women, vowing his celibacy to the creators of Earth in return for helping his tribe, are fictional characters, but the themes of love and romance and erotica are so universal, and so personal to each of us that we all respond to stories in different ways.


Erin's plot is engaging, offering the reader distinctive characters with perfect combination of heart, and cleverness. The author has a subtle way of playing your emotions that it's hard to put the book down. I felt engaged and drawn into the mythical world of the story from the very first page.


Madeleine's and Tak's passion for each other is believable and will be a point of attraction for fans of romance spiced with elements of erotica. I would have liked a bit more development in the action but it can be only me. As this is a short story it can be read in one go.


I was offered a copy of the book in exchange for an honest opinion.


I give it Five Stars.

Posted by Unknown at 3:12 PM
Email ThisBlogThis!Share to TwitterShare to FacebookShare to Pinterest