"Shadows of the Past" by Carmen Stefanescu is a riveting story about souls reborn in a plight to overcome evil. Genevieve, a nun living at an abbey in the 1400s, did the one thing she promised would never happen. She fell in love. What's worse, the man, Andrew, was a priest. Even more surprising is that he had also fallen in love with her. He promised he would return for her so they could renounce their vows and marry. Fear gripped her heart when he didn't show up on time, especially after finding the resident gardener dead in a small house on the premises. She had to get away from Sister Clementa, the Abbess who only meant her ill and the cursed forest that brought death to anyone who entered. 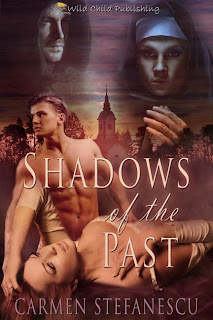 By itself, this plot spiked my interest, but the next chapter introduced another couple, Anne and Neil, with their own drama in the present time. Anne separated from Neil for two years after she caught him with her best friend, Gillian. In an effort to reconcile, Anne agreed to join Neil on a special trip to the country where they could rekindle their love. Wandering around the side of a mountain, unable to find the hotel where Neil had made reservations, they set up camp for the night. That was when Anne experienced her first dream of a mournful Genevieve. Soon after Anne attempted to help this sad nun from the past, the mean Sister Clementa arrived in spirit form to destroy anyone who dared connect to the man she could never have - in this case, Neil the reincarnate Andrew.


With each chapter, the story revealed more secrets which kept me turning each page. I enjoyed that each era had its own chapter, helping me connect how the past events affected the present day relationships and supernatural occurrences.

I recommend "Shadows of the Past" to anyone interested in a meaty story with twists and shocking turns. Genevieve's story does not leave one's heart untouched. The cast of characters are definitely memorable.