It is the turn for author Ashley York, the initiator of this awesome tour,  to be in the spotlight and share with us her novel 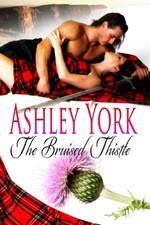 Blurb: Iseabail MacNaughton, the orphaned daughter of a Scottish laird, is forced to flee her home and seek assistance against her lecherous uncle who has usurped her family's land. When she meets Seumas, a strong and valiant mercenary, she cannot help wondering if he could be the one to stand with her again her uncle. But with a price on her head and enemies on all sides, her trust is not something she can afford to give lightly...


Seumas MacDonell is a man wounded in body and soul, driven by guilt. When he rescues Iseabail from one of his own men, he cannot deny the attraction he feels for her, despite the wound that left him unable to act on it. In the hope of finding redemption for his sins, he agrees to help Iseabail...but will his feeling for her prove to be the ultimate obstacle to his salvation?
Buy links  Amazon
Barnes & Noble
Kobo
Apple
EXCERPT:
“Methinks ye wish to place a curse on me with that look of yers… What is yer name?”


Though she jumped at the sound of his voice, she could not help watching as he poured water from a pitcher to a bowl sitting on the table beside the fire. Mesmerized by the motion and the play of firelight over his expansive chest, she did not notice right away when he stopped his movements. She met his eyes. Her heart beat faster and that strange heat centered in her belly again.


He quirked a brow. “I asked ye a question and I expect an answer…or do ye not know how to act with yer betters?”


Her better? Though she seethed inside, Iseabail bit her tongue before she gave herself away. If he but knew how much land her clan called their own...


Lowering her eyes, she quietly answered him. “Forgive me, m’lord. I forget myself.” Unsure what else the charade called for, she curtseyed slightly.


“Yer name?” He still didn’t move. His brows were raised in expectation yet again.


He nodded, apparently appeased. “And my name is Seumas.”


His face settled into a slight smile and he continued with his washing. His muscles flexed as he rubbed across his chest and down his arms, scrubbing the soap into lather then rinsing it clean until his skin glistened. When he finished, he reached for the cloth beside him but turned his face to her.


His tone was coaxing, as if speaking to a newly harnessed foal. She took the few steps toward him. When he reached for her face, she tensed and her mouth went dry. He was no better than her uncle, after all, and disappointment washed over her. She glanced down, steeling herself for the imminent assault, before facing him. His hand stopped just short of her face. Their eyes met and she could tell he was insulted by his tight lips and furrowed brow.


He wiped her cheek with a wet finger. “Ye’re filthy,” he said with disgust. “Make use of my water and be quick about it.” Seumas walked away, rubbing his hands dry.
Posted by Unknown at 10:24 AM
Email ThisBlogThis!Share to TwitterShare to FacebookShare to Pinterest
Labels: Ashley York, excerpt, Medieval Monday, novel, The Bruised Thistle, tour