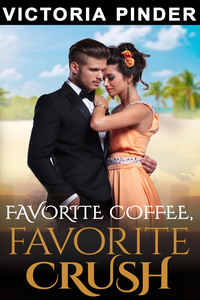 Penny moves back to Miami to start her new job. She must start on Monday, so she has a list of things to accomplish.
A: Find a place to live.
B: Avoid her mother.
C: Reconnect with old high school friends. There was her best friend, Sandra, the dramatic Eva, the dark Michael, her half-brother Wyatt, and her old high school crush Jay.
Jay had never looked twice at her except as a partner in math league, but at least these people respected her.
Jay spots Penny immediately and sets a plan in action. He needs her to pretend to be his date this week. She’s practical minded and stable, which is what he needs his investors to see in him.
Penny’s caught in a whirlwind of plots. Her gold digging mother, Jay’s, Jay’s mother whose out to stop him, and her own plans are being thrown off course. Worst of it is that she’s falling for Jay, all over again.

“Home, sweet, err…coffee.”
Getting out of her car, Penelope brushed her worn jeans to get out a small wrinkle. Not that it mattered. She smelled the coffee drawing her to the door. The delicious aroma of freshly brewed java that could wake her up waited inside. Gainesville had coffee shops, but nothing that held her heart like this place. In high school, this place was her mecca. Her stomach grumbled for the familiar drink.
The coffee shop looked almost the same as it had years ago, except for the aluminum tables and wooden chairs with red cushions. She remembered the plaid chairs and brown tables, but the place still calmed her, like she was coming home.
She stepped up to the counter. “I’ll have a cinnamon dulce nonfat latte, please.”
Leaving Gainesville after college had always been the plan. Just never back to Miami, but she’d changed. She could live here now.
She checked her lip gloss while she waited for the latte at the counter.
When she accepted the promotion from part-time to full-time, she knew she would have to face her mother and the catch of the month, Lars, her mother’s plastic surgeon. What that woman would do for a free tummy tuck.
The job she’d accepted had offered to triple her salary, provided she moved to the Coral Gables office. Somehow, she’d avoid her mother until necessary. What was the man’s name with money this week? Penny ignored that last call, knowing the man with the largest wallet always took precedence over whatever Penelope needed. She watched the barista get the nonfat milk and finish her latte. She’d succeed here, now. She had to.
She’d call Sandra, Eva, John, and Michael later. Wyatt, her half-brother, was stationed overseas, so she’d wait for his weekly call. These people were her real family.
The man handed her the latte. The first sip gave her the strength to do this. The tightness of the ride dissipated while she tasted her liquid savior. Sighing, she tasted heaven, the wake-up to her day.
“Penelope.”
Though the unmistakable voice was deeper, she knew who it was without even turning. Her high school crush, who never noticed her beyond her brain. Pulling at her pink tank top, she wished she’d worn better clothes. “John Jay.”
His steely blue eyes and sandy blond hair were the same color, but his build had grown more muscular. The leanness of his youth had given way to broad shoulders and hard, muscular arms. He had a straight, faded scar on his left cheek that was new—probably a bar fight. Rich boy wore his fancy, perfectly fitted polo and jeans, and was definitely hotter with age. His million-dollar smile and devastating dimples sparked a warm flush that sped through her all the way to the tips of her toes.
“I’m going by Jay these days. It’s less formal.” He winked at her, turning off his tablet and pointing her to his table.
“It’s a good name, but I still prefer Dimples,” she teased. “It’s what I called you on online whenever I needed you.”
His rich, deep laugh sent that familiar spark through her.
Damn. Rich boy knew his effect on women, including her. He could manipulate her when she went quiet, but she’d learned a lot in college. She’d not let him weaken her. 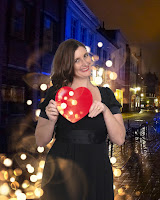 Victoria Pinder grew up in Irish Catholic Boston before moving to the Miami sun. She’s worked in engineering, after passing many tests proving how easy Math came to her. Then hating her life at the age of twenty four, she decided to go to law school. Four years later, after passing the bar and practicing very little, she realized that she hates the practice of law. She refused to one day turn 50 and realize she had nothing but her career and hours at a desk. After realizing she needed change, she became a high school teacher. Teaching is rewarding, but writing is a passion.
During all this time, she always wrote stories to entertain herself or calm down. Her parents are practical minded people demanding a job, and Victoria spent too many years living other people’s dreams, but when she sat down to see what skill she had that matched what she enjoyed doing, writing became so obvious. The middle school year book when someone wrote in it that one day she’d be a writer made sense when she turned thirty.
She’s always been determined. She is amazing, adventurous and assured on a regular basis. Her website is  www.victoriapinder.com.
Member of Florida Romance Writers, Contemporary Romance, Celtic Hearts and Savvy Authors.

For a free novella of Returning for Valentine’s Please Click here: http://victoriapinder.com/returningforvalentineshorttimeoffer 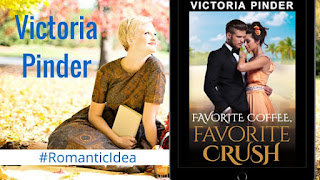