The Way We Live Now,
Trollope's longest novel  -100 chapters – is inspired by the financial scandals of the early 1870s.  Augustus Melmotte, a European-born city financier, whose origins are as mysterious as his business dealings is at the center of the story. The author describes him as "something in the city.” But that  "something in the city” part is not always clear.
Within weeks of arriving in London, he announces a new company and promises instant fortune to those who join him in this scheme. Melmotte is surrounded by a circle of decadent aristocrats, scheming widows and nouveau riche businessmen, all trying to get a piece of the financial pie.  Doesn’t it all sound like what’s happening in present day times in many parts of the world? 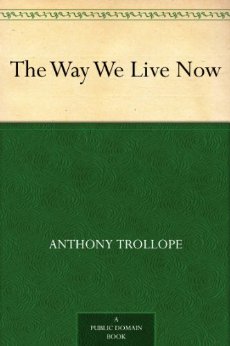 The female characters are treated with sympathy, clearly struggling to make their way in a society where their scope for freedom of maneuver is highly restricted, though Henrietta Carbury and her innocent and longing trials with her suitor, Paul Montague, comes across as more elegant and refined than those of many modern heroines.


It’s a powerful Victorian satire on greed and dishonesty  that pervaded the moral, political and intellectual life of that era, a novel in which each and everyone of his characters has a fault of some kind- the same as people are in real life.


Trollope's masterpiece, that enlightens as well as it entertains, is as relevant today as it was when he wrote it. His descriptive writing makes it rather easy for the reader to visualize characters, locals, country side and the various cities very well.
Find my review here: Amazon.com
Posted by Unknown at 1:13 PM
Email ThisBlogThis!Share to TwitterShare to FacebookShare to Pinterest
Labels: #AugustReviews, Amazon, Anthony Trollope, Book Review, my reviews, novel, The Way We Live Now, Victorian satire