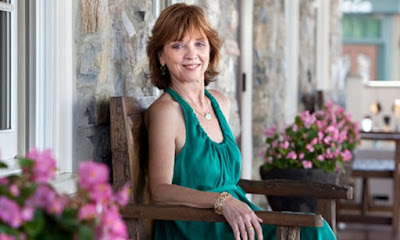 "Write what you like to read. If you are not captured by the story, who will be? Write every day—a habit that you need to build. And remember to have fun with it."

She didn't start writing until she was 29 years old. It all began with a #2 pencil and a spiral notebook. Snowed in with her two young boys during a 1979 storm, Nora Roberts, AKA, J.D. Robb, Jill March, and Sarah Hardesty (U.K. pseudonym), got in touch with her creative side and began writing.


She once said, "I've never taken a course on writing. I've never read a book on writing. This isn't something that would work for me. Every writer has to figure out what works best -- and often has to select and discard different tools before they find the one that fits..."

She also writes a futuristic crime/romance series under the name J.D. Robb.

She first tried submitting her works to Harlequin, but was rejected. Her first publisher was Silhouette.

Posted by Unknown at 12:00 AM
Email ThisBlogThis!Share to TwitterShare to FacebookShare to Pinterest
Labels: curious facts about, Nora Roberts, Wednesday Writing Wisdom, writer