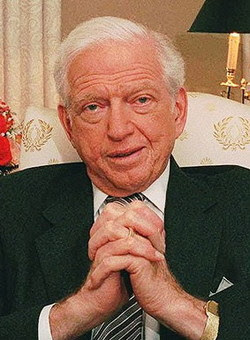 Usually, when people get to the end of a chapter, they close the book and go to sleep. I deliberately write a book so when the reader gets to the end of the chapter, he or she must turn one more page.

Sidney Sheldon joined the army during World War II but was disabled before seeing any action. He moved to New York City and began writing Broadway musicals. He continued to write for Paramount Pictures and MGM Studios.

With the rise of television as a popular medium, Sheldon decided to try out his luck in it. He wrote a series called ‘The Patty Duke Show’ and for the next seven years wrote every episode of it.

Sidney Sheldon wrote a whole raft of bestsellers even though he didn't start writing novels until after he turned 50.

Sidney Sheldon's second novel The Other Side of Midnight (1973) became #1 on The New York Times bestsellers list.

Posted by Unknown at 12:00 AM
Email ThisBlogThis!Share to TwitterShare to FacebookShare to Pinterest
Labels: Sidney Sheldon, Wednesday Writing Wisdom